Duterte’s party picks him as VP candidate in Philippines 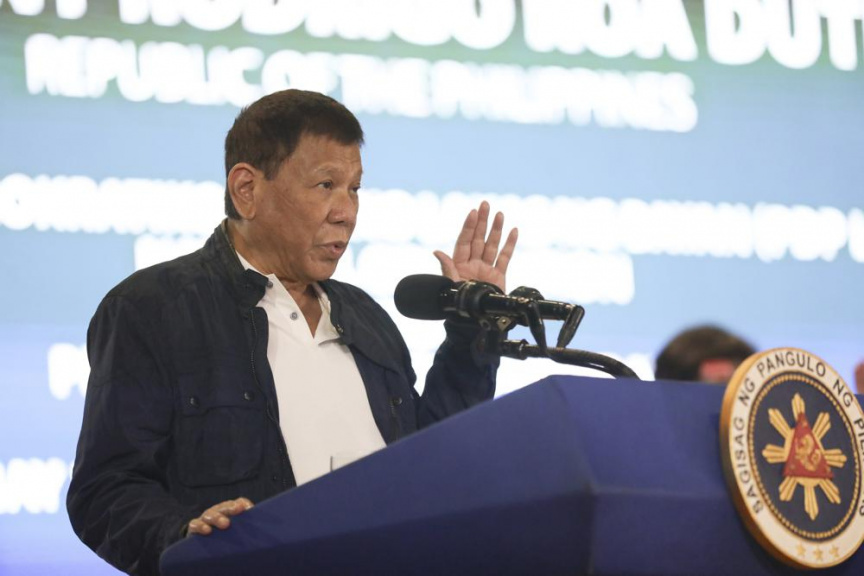 MANILA, Philippines (AP) — The Philippines’ governing party nominated President Rodrigo Duterte on Wednesday as its vice presidential candidate in next year’s elections, a maneuver widely seen as an effort to keep the popular leader near the center of power while avoiding constitutional term limits.

The party’s nominee for president, however, declined to run.

Duterte, 76, notorious for vulgar rhetoric and a crackdown on illegal drugs that has killed thousands of mostly petty suspects, told the national convention of his PDP-Laban party that he hopes “this will allow me to continue serving the Filipino people and help lead the entire nation toward greater progress.”

Duterte attended the convention in San Fernando City, north of the capital, Manila, in person while others attended online to observe COVID-19 health protocols. The party was the first to hold a convention to select candidates for the May 9 national elections.

“Do you know why I’ll be running for the vice presidency? Is it ambition? Maybe. But is it really a sense of love of country? Yes,” Duterte told the gathering. “Is it really ... because I want to see the continuity of my efforts even though I may not be the one giving the direction? Maybe I can just help.”

Duterte’s popularity has remained strong despite the Philippines’ struggles through the COVID-19 pandemic, with rising infections and death rates and a slow vaccine rollout.

Jean Encinas-Franco, a political science associate professor at the University of the Philippines, said the fact that Duterte has “the audacity to run” and the party nominated him indicates “they’ve been emboldened by the approval and trust ratings of the president despite the bungling of the pandemic response.”

Polls indicate strong support for Duterte running in tandem with his daughter, Sara Duterte, as the candidate for president — though he suggested he might step out of the vice presidential race if she announces a bid for the top job.

Sara Duterte, 43, is currently the mayor of Davao City and is a member of the regional HNP party, which she founded in 2018. She has supported her father’s party at the national level.

Under Philippine law, the vice president is elected separately from the president and Duterte’s party on Wednesday nominated his longtime ally and former aide Sen. Christopher “Bong” Go for the candidacy.

But Go, who had told the party at the end of August that he had decided not to run for president, in what analysts suggested was a move to pave the way for Sara Duterte’s candidacy, declined the nomination.

“I repeat, I am not interested to run for president in the coming election,” he said in a statement. “My whole heart and mind are focused on serving our countrymen and I have no desire to compete for the highest position in the country.”

No alternative to Go was immediately named.

Philippine presidents are limited by the 1987 Constitution to a single six-year term. At least two former presidents, Joseph Estrada and Gloria Macapagal Arroyo, have made successful runs for lower public offices after serving as president, but not for vice president.

If Duterte goes ahead with his run, it will likely face court challenges from the opposition, though the Supreme Court has strongly supported the president’s moves in the past.

“The constitution is not particularly clear whether the president running as vice president is legal or not, but what is clear is that it’s against the spirit of the particular constitutional provision banning the reelection of Philippine presidents,” said Cleve V. Arguelles, a political scientist at De La Salle University in Manila.

Critics of Duterte say his bid for vice president is also an attempt to protect himself from possible prosecution by the International Criminal Court, which has said it found reason to believe crimes against humanity have been committed during Duterte’s anti-drug crackdown.

Hours ahead of the convention, Sen. Panfilo Lacson of the Partido Reporma or Reform Party launched his candidacy for president, with Senate President Vicente Sotto III as his running mate. They vowed to give local governments more responsibility and to win back public trust in institutions.

Lacson lost his first bid for president to Arroyo in 2004.

A rival faction of PDP-Laban led by boxer and Senator Manny Pacquiao, who has been touted as a possible presidential candidate, will hold its convention later this month.

Another familiar name who has suggested he might announce a bid for president is Ferdinand Marcos Jr., son of the ousted dictator whose government was infamous for corruption.