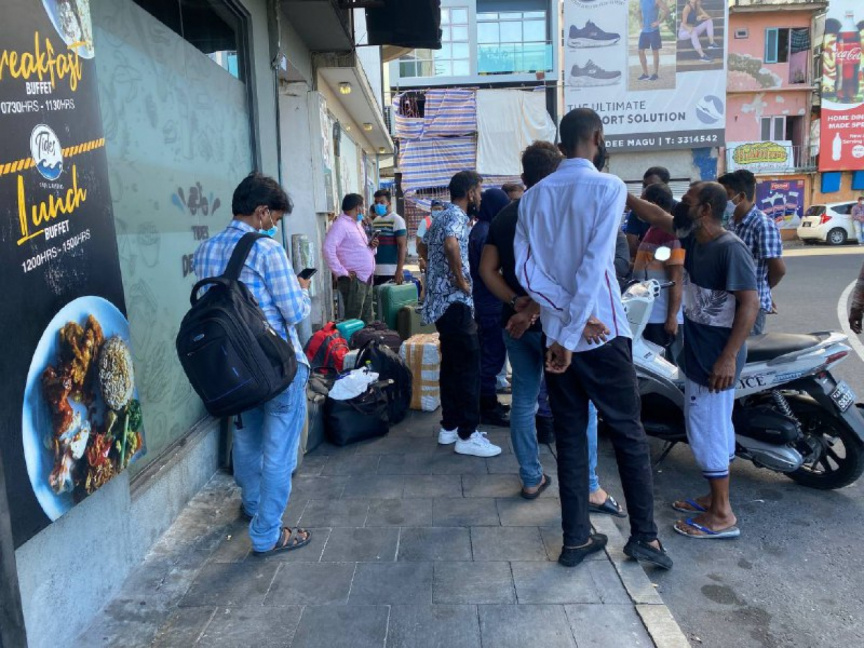 Group of tourists stranded on Male' streets with no place of accommodation on August 23, 2021. (Sun Photo/Fayaz Moosa)

A group of tourists who arrived in the Maldives to undergo a quarantine period have been left stranded on the streets once again. While the total count of tourists who had gotten stranded today remains unclear – 13 of them crowded near Tides Café located in Male’ City ring road, having no place of accommodation.

One of the tourists who was at scene explained to Sun that they had arrived in the Maldives through an agent. They had come to Male’ City after undergoing 14-days of quarantine at AA. Bodufulhudhoo when their agent had informed them that their flight was scheduled for today.

While they had arrived in Male’ City yesterday under the impression that their flight was scheduled for today – the group was forced to wait at the ferry terminal for about seven hours as travel arrangements had not been confirmed in the first place. Following this, they were taken to stay the night at a guesthouse – but as travel arrangements were not confirmed for today as well – they had been forced out on the streets.

“The agent is now planning to find a guesthouse for us to stay. The agent speaks to us very rudely. Insulted our country as well. Now we have to pay to a guesthouse to stay the night again. Our flight to Saudi Arabia is scheduled for tomorrow. We just want to stay at a decent place tonight as well. But the agent keeps lying,” the tourist had said.

The tourist further detailed that each of them had paid around MVR 70,000 to the agent based in their home country and the one based in the Maldives – to come to the Maldives.

As they remain stranded on the roads – the Police had gone to the scene to investigate the matter.

When the Police had questioned the person who the group had pointed out to be the local agent – the agent had received the group at the request of the Tourism Ministry.

The agent also claimed that the tourists were lying – and was also cheated by the party that had asked to receive the group. In addition to this, the agent stated that no agreement has been made between the agent and the tourists – whereas no money has been charged from the tourists either.

The group continues to deny the claims made by the agent.

On the night of August 15, a similar incident had taken place in Male’ City. A group of 30 tourists was scammed by a party into coming to the Maldives under the pretense of a hotel booking – leaving them stranded on the streets upon their arrival subsequent to the non-existence of a place of accommodation.

Following this, Tourism Minister Abdulla Mausoom had shared his concerns regarding the scam – labeling it as an act of human trafficking rather than tourism.