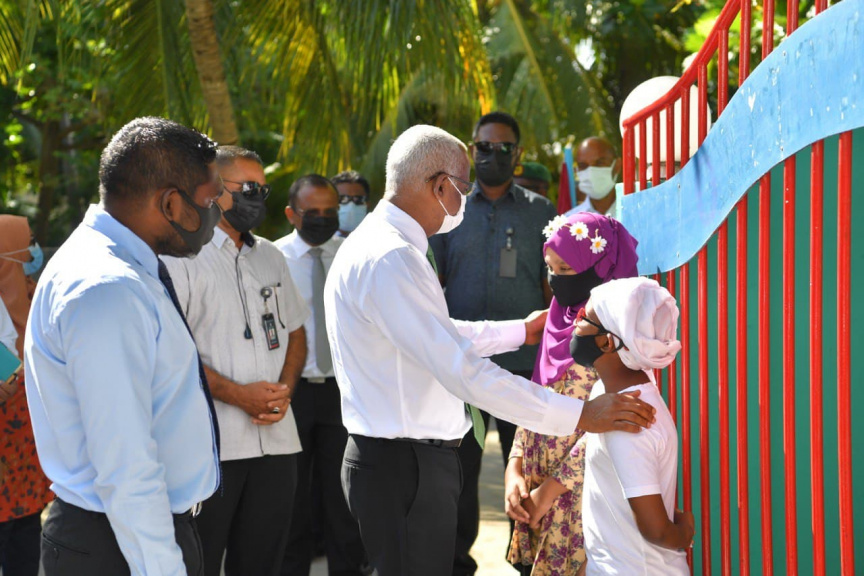 In President Ibrahim Mohamed Solih’s ongoing Thaa Atoll tour – he traveled to his fourth stop this morning, Th. Veymandoo where he visited Veymandoo School and the Family and Children’s Service Centre (FCSC) located on the island.

FCSC is run by the Ministry of Family, Gender, and Social Services – where social protection services and safety is provided to vulnerable groups including women, children, the elderly, and persons with disabilities. At present, six children between the ages of 16 and 17 years are seeking shelter at the facility.

After completing his visit to the FCSC, President Solih had then visited Veymando School – where toured the school building and met with students, teachers and the management. He also held discussions to inquire about the needs of the schools and requirements to improve the quality of the education provided there.

President Solih also observed the progress of the multi-purpose hall being developed at the school under the government’s policy to prioritize decentralized education development.

A total of 355 students are currently enrolled in Veymandoo School in the grades between 1 and 12.

President Solih is accompanied on the tour by cabinet ministers, senior officials from the President’s Office, and a delegation of high-level government officials.

Parliament consideration to be sought to join OACPS