Some MDP members ask Mariya & Imran be removed as ministers 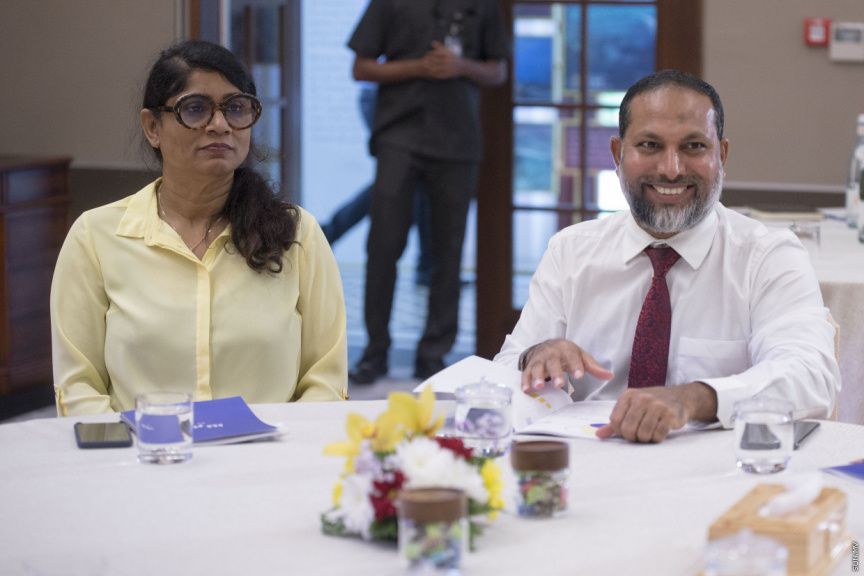 Some members of the Maldivian Democratic Party’s (MDP) National Council has called on to remove Defense Minister Mariya Ahmed Didi and Home Minister Imran Abdulla from their posts in order to enforce the recommendations proposed in the Inquiry Report compiled by the Parliament Committee on National Security Services (241 Committee) in connection to the May 6 terror attack on Parliament Speaker, former President Mohamed Nasheed.

The Inquiry Report complied by the 241 made a total of 45 recommendations – which covers general security to Nasheed, and his security at his residence and during his travel via air, land, and sea. During a convening of the National Security Council (NSC) last Friday, it was noted that 38 of the recommendations proposed in the report are already being implemented.

Speaking at a convening of the MDP’s National Council held last night, Thoddoo MP Hassan Shiyan stated that the government’s being withheld in enforcing all the recommendations proposed in the report as Minister Mariya and Minister Imran remains in their posts.

“I am in the view that the flawless implementation of the recommendations proposed in the Inquiry Report will be proven difficult if the Defense Minister and Home Minister remains in their posts. The flawless implementation of the recommendations are something we strongly ask for – even if it is through removing both of them from their posts,” he had said.

In addition to this, Shiyan stressed the implementation of they cannot wait to implement the recommendations after the next elections – and it must be done now.

Also speaking at the convening, Maafannu-Dhekunu MP Ibrahim Rasheed (Bondey) also expressed his concern regarding the government’s failure to disclose information as to how the recommendations were being implemented. He also reiterated that the flawless implementation of the recommendations is in jeopardy if Minister Imran remains in his post.

During the convening, Vilifushi MP Hussain Afeef also noted that the government had stated that how the recommendations were being implemented was not disclosable information.

A homemade remote-controlled IED was strapped to a motorcycle parked nearby Nasheed’s residence and was detonated at 08:27 pm on May 6, just as Nasheed, 54, exited his residence and went to get in his car. Nasheed was thrown to the ground and sustained multiple shrapnel injuries.

Prior to the attack, Hulhudhoo MP Ilyas Labeeb was passed on information by a civilian regarding plans of an attack on Nasheed – which Ilyas brought to the attention of Minister Mariya. Minister Mariya defended herself for not following protocol – citing that she did not believe that information given could be pursued as "credible, actionable intelligence".

The President had held a meeting with the National Security Council (NSC) last Friday, to discuss the enforcement of the recommendations proposed in the Inquiry Report.

One of the recommendations – which is the establishment of a system for the exchange of terrorism-related intelligence between intelligence agencies in the Maldives, as required under the Counter-Terrorism Act, - was announced complete by Minister Imran last Tuesday.

Nevertheless, MP Afeef has expressed great concern over the failure to formulate a ‘National Intelligence Act’ as per the recommendations during last night’s convening.

'Unbelievable things have happened during election'

MDP: Voting will continue despite disturbances