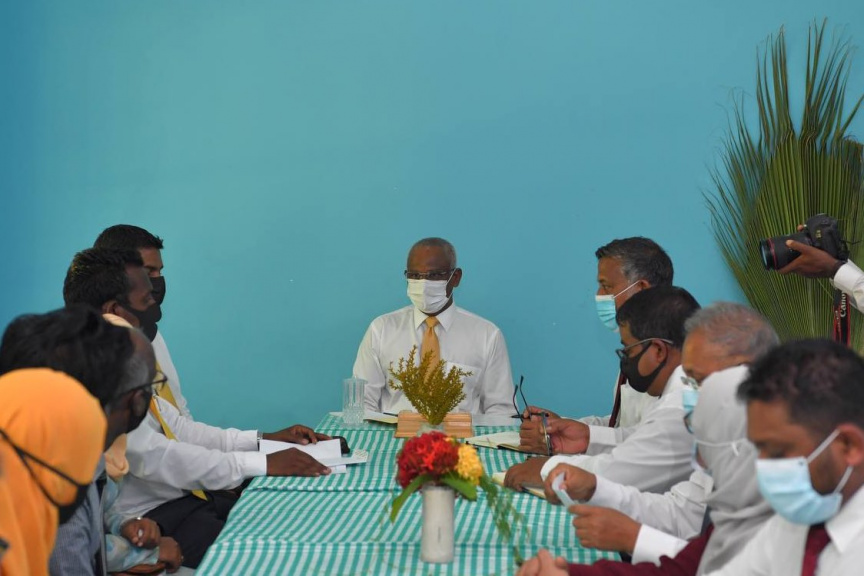 President Ibrahim Mohamed Solih said on Wednesday that a feasibility study is underway in order to begin a project to link Th. Veymandoo and Th. Kinbidhoo via a causeway.

He made the statement in a meeting with members of Kinbidhoo Council and Women’s Development Committee on Wednesday morning, as part of his current tour of Th. Atoll.

In the meeting, President Solih said the government, in addition to building a causeway between Veymandoo and Kinbidhoo, also plans on conducting a land reclamation project and housing project in Kinbidhoo in order to address scarcity of land and housing in the island.

He said that provisions for a housing scheme in Kinbidhoo Island in next year’s budget.

He also said that the government plans to restructure the remuneration package for WDC members.

President Solih also spoke about the measures in place to control COVID-19, and thanked the council and the residents of the island for their support.

He urged council members to encourage their constituents to get vaccinated at the earliest in order to safeguard the community against further danger from the pandemic.

President Solih is scheduled to visit seven islands in his current tour of Th. Atoll. He is accompanied on the tour by cabinet ministers, senior officials from the President’s Office and a delegation of high-level government officials.