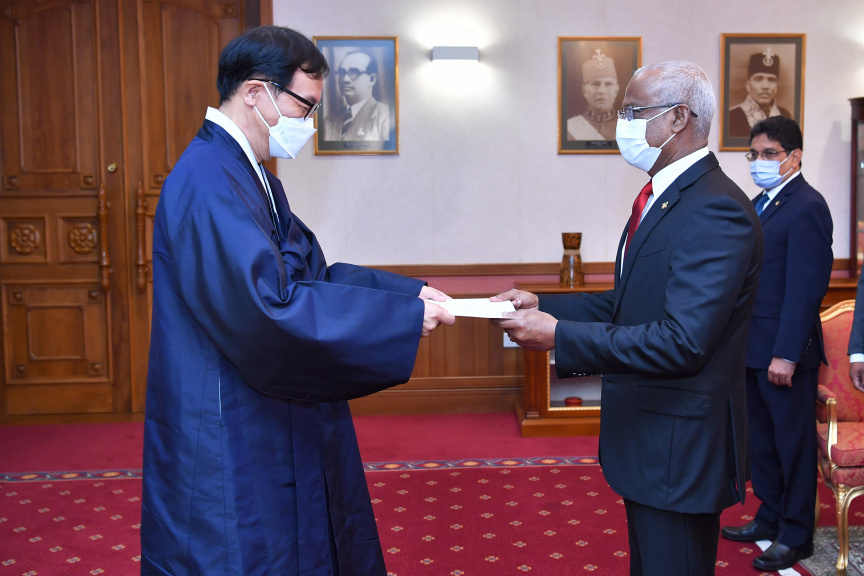 Ambassador of South Korea to the Maldives Jeon Woonjin

Jeon Woonjin, the newly appointed Ambassador of South Korea to the Maldives, presented his credentials to President Solih at a ceremony held this morning at the President’s Office.

A meeting between the two was held following the credentials ceremony at which President Solih congratulated Jeon on his appointment and the commencement of his term. President Solih also extended his gratitude to South Korea for supporting the Maldives’ candidature during the 76th Nations General Assembly (UNGA) elections, held in June.

The President and the Ambassador also discussed mutual areas of concern for both the countries – including climate change.

In concluding the meeting, both the President and the Ambassador reiterated their commitment to work together to enhance the bilateral relationship between the Maldives and South Korea.

Ambassador of Cuba to the Maldives Andrés Marcelo González Garrido

Andrés Marcelo González Garrido, the newly appointed Ambassador of Cuba to the Maldives also presented his credentials to President Solih during a ceremony held at the President’s Office this morning.

Following the credentials ceremony, a meeting was held between the two where President Solih thanked the Cuban government for the assistance provided in the health and higher education sectors. Accordingly, President Solih highlighted that the Cuban government provides scholarships for Maldivian students from the Latin American School of Medicine. In the past, Maldives have received the services of Cuban doctors as well. Both sides also discussed exploring avenues to expand scholarship opportunities for local students at Cuban educational institutions.

President Solih also thanked the Cuban government for supporting the Maldives’ candidature during the 76th Nations General Assembly (UNGA) elections, held in June. In return, the Ambassador had assured Cuba’s intention to remain a friend and a partner to the Maldives – also adding that the Cuban Parliament is standing ready to extend cooperation with the Maldivian Parliament.

Both sides also touched upon the COVID-19 situation and the recovery efforts in their respective nations.

In concluding the meeting, both the President and the Ambassador reiterated their commitment to work together to strengthen cooperation between Maldives and Cuba on matters of mutual interest.

Ambassador of Vietnam to the Maldives Ho Thi Thanh Truc

Ho Thi Thanh Truc, the newly appointed Ambassador of Vietnam to the Maldives presented her credentials to President Solih during a ceremony held this afternoon at the President’s Office.

During a meeting held afterward, President Solih noted that the two countries are set to mark the 46th year of diplomatic relations this year – expressing that he hoped for further bilateral discussions and exchange of high-level visits in order to even solidify the partnership more and also explore additional avenues of cooperation.

President Solih also thanked the Vietnamese government for the assistance rendered to the Maldives during the COVID-19 pandemic. He also added that he wishes to explore new possibilities for increasing trade, investments, and other areas of cooperation between the two countries.

Ambassador Ho gave assurances that her country remains committed to Maldives as a friend and a partner – adding that they are ready to extend support and assistance to the Maldives in every way possible.

Highlighting that Maldives and Vietnam share common views on various issues of mutual interest – both sides expressed interest in working closely within the United Nations on areas such as climate change and sustainable development.