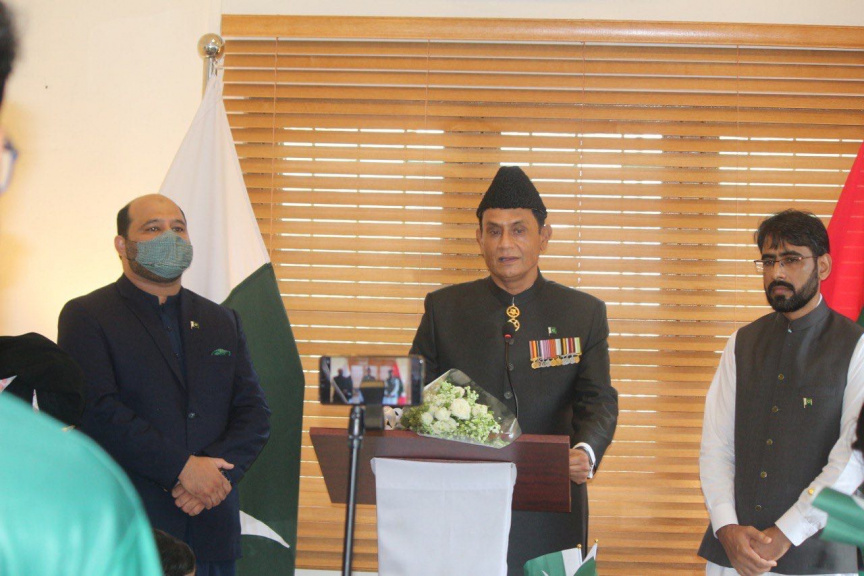 Speaking at the ceremony, Mukhtar congratulated all Pakistanis on the auspicious occasion of Independence Day.

"The day is an occasion to pay tribute to all those sons of the soil who laid lives while defending and protecting territorial as well as ideological frontiers of the mother land,” he said.

Mukhtar, in his speech, highlighted on importance of the independence. He spoke of how Muslims of the subcontinent, under the leadership of Pakistan’s founder, Muhammad Ali Jinnah, strived for a separate homeland, and of how Pakistan emerged on the world map as the first ideological Muslim state on August 14, 1947.

Mukhtar also spoke of the current situation in Pakistan. He said that Pakistan is on its way to progress and development under the able leadership of the Prime Minister Imran Khan. He said that with Khan’s visionary policies, Pakistan has been able to manage the pandemic effectively and keep its economic systems operational.

He noted that efforts are under way to vaccinate all the people in Pakistan, and spoke of Khan’s ‘Billion Tree Tsunami Program’, along with others initiatives, being implemented across Pakistan to mitigate the effects of climate change.

Mukhtar said that while Pakistan celebrates its independence, it continues to grieve for the suffering of the people of Kashmir.

"Our hearts are profoundly grieved by the sufferings of our brethren in Indian illegally occupied Jammu and Kashmir, who are striving for their legitimate right to self-determination," he said.

Mukhtar reiterated Pakistan’s support to the Kashmiris in their struggle for their right to self-determination.

He also called on the international community to play their role in fulfilling the promises made to Kashmiris to support their right to self-determination.

He said that resolution of the Kashmiri conflict in accordance with UN resolutions and the aspirations of Kashmiris is the path to long-lasting peace in the South Asian region.

Mukhtar, in his speech, also reiterated Pakistan’s commitment to enhancing existing bilateral ties between Maldives and Pakistan, ties, which he said, is based on a common faith, culture, historical links, mutual respect and trust.

He noted that Maldives and Pakistan celebrate 55 years to official diplomatic ties between the two countries this year, and conveyed his greetings and best wishes to the Maldivian government and people of Maldives.

Deputy Head of Mission, Zulqurnain Ahmad, also spoke at the ceremony. He, too, spoke of the importance of independence and congratulated Pakistanis on occasion of Independence Day.

He also spoke of the contribution of Pakistani professionals in various sectors for the progress and development of Maldives.

Pakistan ambassador: Artists are assets of a nation

Pakistan sends greetings on the occasion of Victory Day