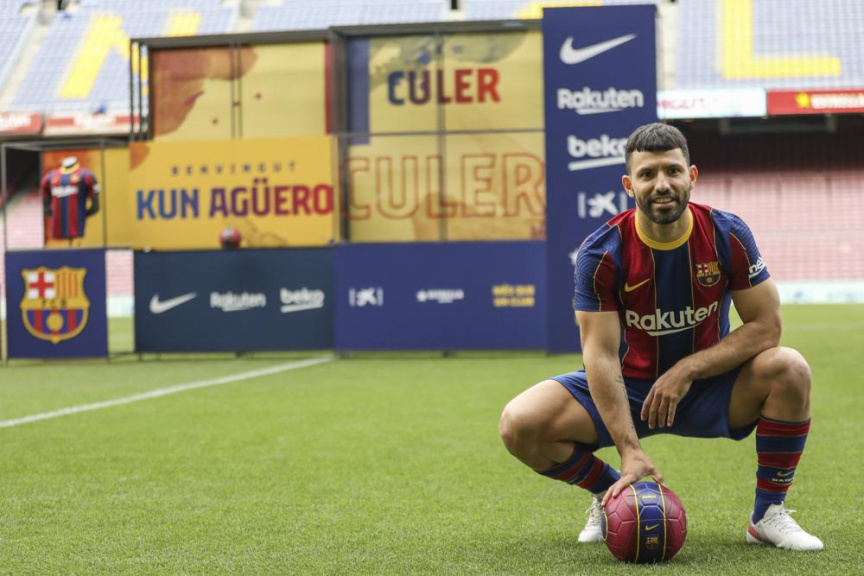 Argentinian forward Sergio 'Kun' Aguero poses for the media during his official presentation after signing for FC Barcelona in Barcelona, Spain, Monday May. 31, 2021. (AP Photo/Joan Monfort)

BARCELONA, Spain (AP) — In more bad news for Barcelona after the departure of Lionel Messi, the club said Monday that new striker Sergio Aguero will not debut with the club until mid-October because of a calf injury.

Barcelona said medical tests showed that Aguero has a tendon injury in his right calf and will be sidelined for about 10 weeks.

It was the latest setback for Barcelona after the club announced last week that it could not sign star striker Messi to a new contract because of its financial struggles.

Spanish media said Aguero got hurt in Sunday’s training session. He did not participate at the ceremony during which the squad was introduced to fans later, nor played in the exhibition match in which Barcelona defeated Juventus 3-0.

Aguero was with the Argentina team that won the Copa America in Brazil last month.

The 33-year-old striker was signed in July as a free agent from Manchester City, where he had many injury problems in his 10 seasons at the club. But he still left as City’s record scorer with 260 goals.

Barcelona, whose only title last season came in the Copa del Rey, will open its Spanish league campaign against Real Sociedad on Sunday at the Camp Nou Stadium.