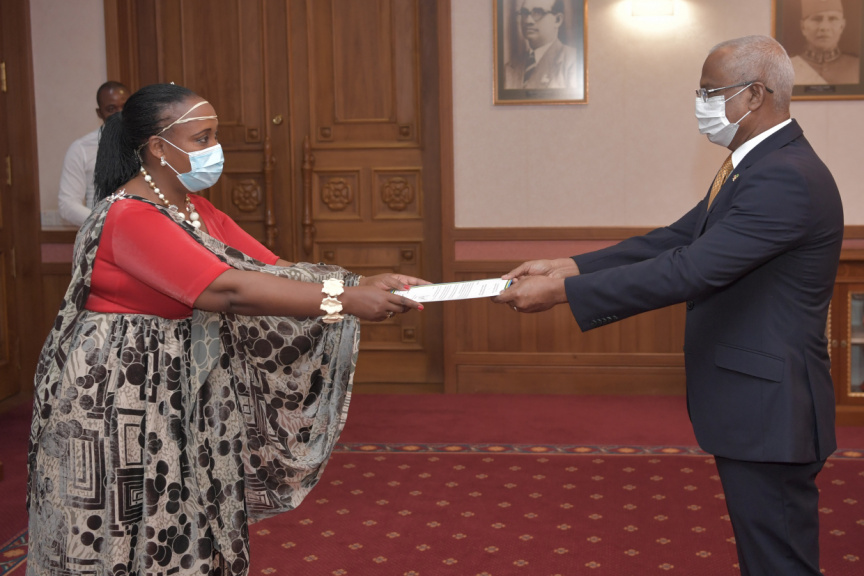 The new High Commissioner of Rwanda to Maldives, Jacqueline Mukangira, has presented her credentials to Maldivian President Ibrahim Mohamed Solih.

Mukangira presented her credentials at a ceremony held at the President’s Office on Sunday morning.

Following the presentation of her credentials, Mukangira and President Solih discussed mutual areas of cooperation.

President Solih congratulated Mukangira on her appointment as the new Rwandan High Commissioner to Maldives and expressed confidence that the ties between Maldives and Rwanda will continue to prosper under her tenure.

He also conveyed his appreciation to the Rwandan government for its support to Maldives’ candidature during the 76th United Nations General Assembly (UNGA) elections back in June.

Mukangira, meanwhile, conveyed warm greetings to President Solih on behalf of Rwandan President Paul Kagame. She congratulated Maldives for its landslide victory in the UNGA elections, and reaffirmed Rwanda’s continued support to Maldives in the international arena.

She said that Rwanda looks forward to boost bilateral ties between the two republics.

Both President Solih and Mukangira committed to working together to further strengthen the bilateral relationship between Maldives and Rwanda.

Majlis informed bill to increase GST will be submitted