President says would not take huge loans from foreign parties 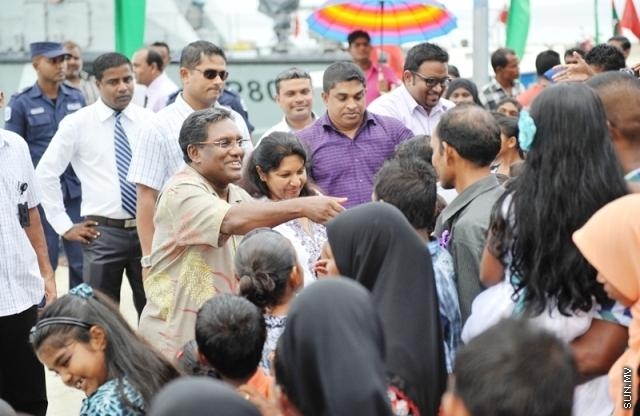 President Dr. Mohamed Waheed Hassan Manik has said that his policy would not be to borrow huge loans from foreign parties in order to run the government.

Addressing the people of Faafu Nilandhoo, during his ongoing visit to Faafu atoll and Dhaalu Atoll, the President said that that his policy is to meet the expenditure of the government with government income. He also said that his priorities are decided on the basis of what is necessary for the country.

“We are trying to secure sources of income for the nation. I will not try to run the government by securing huge loans from foreign parties. We are trying to spend from what we earn”, said the President.

The President meaningfully vowed that he “would not commit treachery against the nation”.

The President also said that several ongoing development projects would be completed within the next six months. He specifically mentioned the project of building a 16 kilometer road in Laamu Atoll, the new building of Indira Gandhi Memorial Hospital in Malé, and the beginning of construction of a new hospital at Addu City. He also said that the addition of an A-320 plane to the fleet of the Maldivian, which is the national airline, is a huge improvement of the country’s air transport industry.

“Attempts are being made to weaken and oppress the Maldivian people, destroy the nation’s economy, and to create mischief and trouble among the people, and these attempts have been made by individuals who are enemies of the people. The government is very much alert about these individuals, and with God’s Grace, we shall not allow them to push this nation into an abyss of chaos and disorder”, said the President.