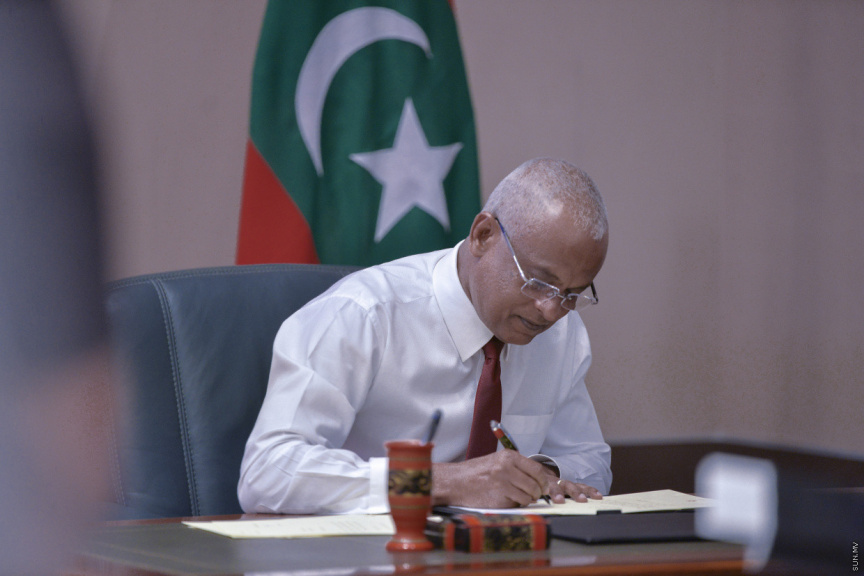 Maldives Statistics Act was formulated with the aim to advance the statistics industry in the country and to collect relevant data regarding the Maldives' economy, ecology, and social aspects, and use that data responsibly for the benefit of all citizens.

Following today’s ratification, the law would transfer all resources, legal obligations, and staff employed by the previously created National Bureau of Statistics to the Maldives Bureau of Statistics – that will independently undertake the collection, analysis, usage, and publication of national statistics, under an established national standard. The law also stipulates that the Finance Minister would be answerable to the People's Majilis regarding matters pertaining to the Bureau.

Additionally, it is also stated that the President - under the direction of the Minister - will appoint a Chief Statistician to oversee the work of the Bureau for a term of five years.

A Chief Satistsitican being appointed in this regard, must not be someone who is incumbent in a political or elected position. Moreover, the person also should not be a member of any political party and must possess adequate education and experience to carry out the duties effectively.

The law also mandates the establishment of a Statistical Council, comprising of 10 members, to provide counsel on all matters related to the field within the next 60 days, The Council will be appointed by the Finance Minister for a term of five years. Such members being appointed must also possess adequate education and experience to carry out their duties effectively.

Meetings of the Statistical Council will be headed by the Chief Statistician.

People's Majilis passed the Maldives Statistics Act on July 8, 2021, at its 21st sitting of the second session. Subsequent to receiving ratification, the bill has been published in the Government Gazette and is now in effect.