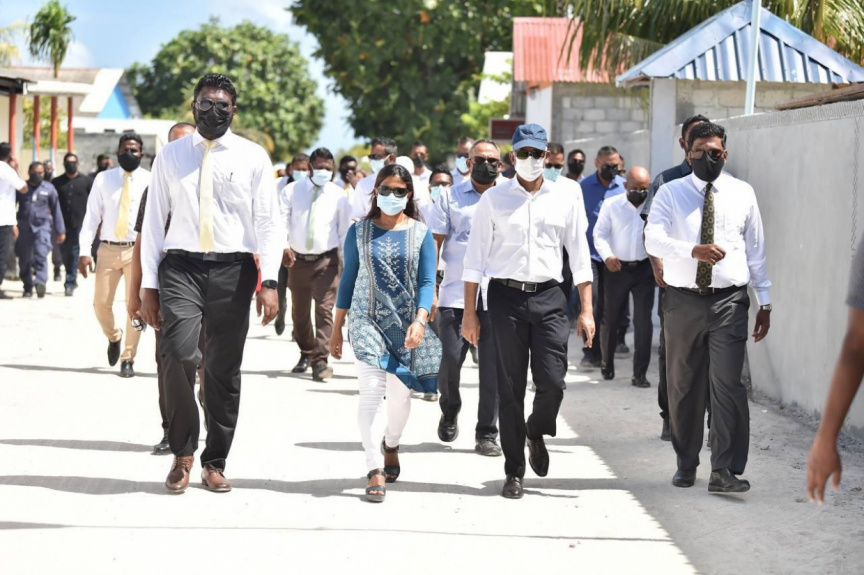 HDh. Kumundhoo Council, in a meeting with President Ibrahim Mohamed Solih on Saturday, discussed the needs of the residents of the island.

President Solih and First Lady Fazna Ahmed are in Kumundhoo as part of a three-island tour of northern Maldives.

The President met with members of the Kumundhoo Council at the local school on Saturday afternoon.

In the meeting, the councilors discussed pertinent issues and concerns with the President regarding ongoing developmental projects and other services and needs of Kumundhoo residents.

Some of the major concerns raised by the councilors include difficulties in using the current harbor, the need to expand the harbor, and the need to improve healthcare, education, schooling, social welfare and business sector development.

The councilors shared a video presentation of the developmental master plan of the island in the meeting.

The meeting was also attended by members of the Women’s Development Committee, who emphasized the need for a resident gynecologist on the island and discussed ways to seek opportunities to promote and market crops harvested by local women.

In response to the concerns, President Solih agreed on the need for a proper harbor in Kumundhoo, and promised to conduct further discussions with relevant government bodies to resolve the issue.

He also addressed the concerns regarding the health center and 12-classroom school building upgrade, and added that the government plans to establish a police outpost in Kumundhoo.

The first couple’s current visit to Kumundhoo is the second leg of a three-island trip to the north of Maldives. The President and First Lady initially visited Kulhudhuffushi City, and are scheduled to visit HDh. Hanimaadhoo as the last leg of the trip.