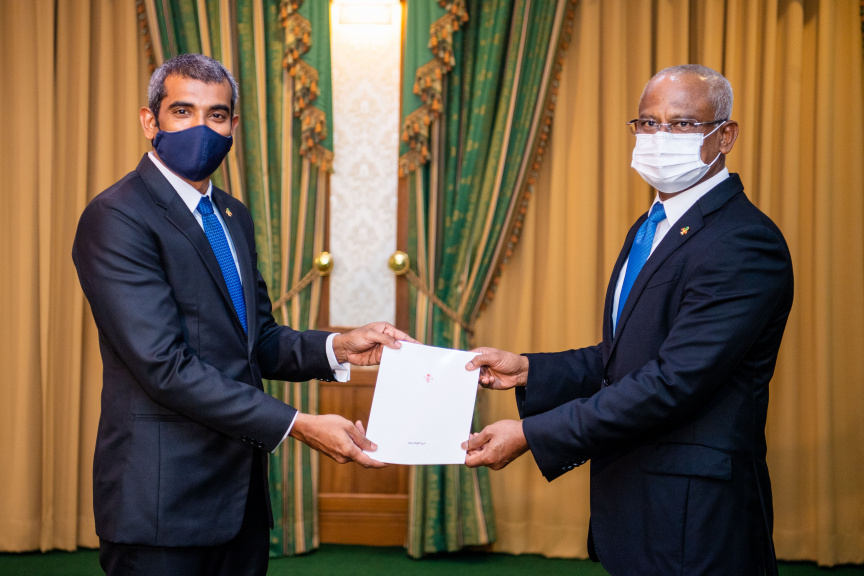 Hussain Niyazy (L) is presented with his letter of appointment as Auditor General by President Ibrahim Mohamed Solih (R) on July 13, 2021. (Photo/President's Office)

Hussain Niyazy has been appointed the new Auditor General of Maldives.

Niyazy was presented with his letter of appointment by President Ibrahim Mohamed Solih in a function at the President’s Office on Tuesday morning.

His oath of office was administered by Supreme Court Justice Mahaz Ali Zahir.

Niyazy, who served as Assistant Auditor General up until his appointment as Auditor General, secured the backing of the Parliament for his new role with a unanimous vote of 64 parliamentarians last week.

Niyazy holds a Bachelor of Commerce from University of Bangalore, India, and has been an associate member of the United Kingdom’s Chartered Institute of Management Accountants (CIMA) since 2008.

He replaces Hassan Ziyath, who resigned as Auditor General in May, after it came to light that he was named on the list of suspected beneficiaries of funds stolen from MMPRC.