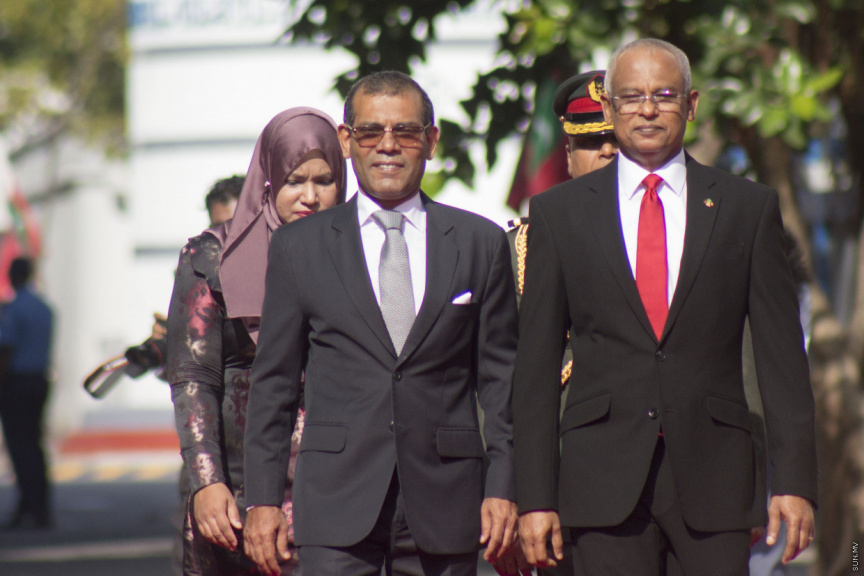 Spokesperson of the President’s Office Mabrook Azeez has stated that President Ibrahim Mohamed Solih’s only concern right now is to fulfill his electoral pledges.

Mabrook said this in response to a question posed by the Sun regarding messages sent to a Whatsapp group of Maldivian Democratic Party (MDP) by Speaker of the Parliament, former President Mohamed Nasheed stating that he can no longer stand in political alignment with President.

According to Mabrook, the President’s sole focus right now is to fulfill the electoral pledges made by him – whereas he does not have an opinion regarding anything else. Via text messages sent to a Whatsapp group of MDP yesterday. Nasheed stated that he will no longer stand by the President politically, and will consider collaborating with former President Abdulla Yameen Abdul Qayyoom and his party, Progressive Party of Maldives (PPM), should they be open to moderate religious views.

“This not because we have any personal differences. There never will be. At this moment in time, however, we have different political ideologies. No matter what, we will always stand together when it comes to personal matters,” Nasheed had said.

While Nasheed has expressed his willingness to work with Yameen and PPM, speaking on behalf of Yameen, People’s National Congress (PNC) leader Abdul Raheem Abdulla (Adhurey) said Yameen supports the decision made by the people in the 2007 constitutional referendum taken to decide a system of government in the Maldives.

In addition to this PPM’s Deputy Leader, Naifaru MP Ahmed Shiyam says his party has no deal to make with MDP citing fundamental differences in principles, which he said PPM is unwilling to compromise.

Nasheed also stated in his texts that he cares little for any negative sentiments MDP members may express on this – however, encourages fellow party members to avoid any acts that may adversely affect the President – and also to set aside personal grudges.

Nasheed and the President have been friends and political allies for a long time. A rift between them has been created this year subsequent to the President opposing Nasheed’s wishes to change the system of governance in the Maldives to a parliamentary one instead of the current presidential one – and becoming the Prime Minister. Accordingly, the President had responded to Nasheed stating that the current system is in place with the vote of the people in which a change can only be made with the vote of the people.

Following this, Nasheed has been advocating to hold a referendum.

Nasheed has also accused the President of influencing the Parliament’s 241 Committee’s inquiry into the bomb attack on Nasheed. The President had refuted this stating that Nasheed himself would be well aware that this was a baseless allegation.

The ruling party, MDP, has now become two factions. While some members of the party have explicitly shown their support to the President, some others have expressed their support for Nasheed. This disparity is already evident in how parliament members from MDP work now. One MDP member has also called out the resignation of the President while speaking at a parliamentary debate.

President set to travel to Qatar for World Cup