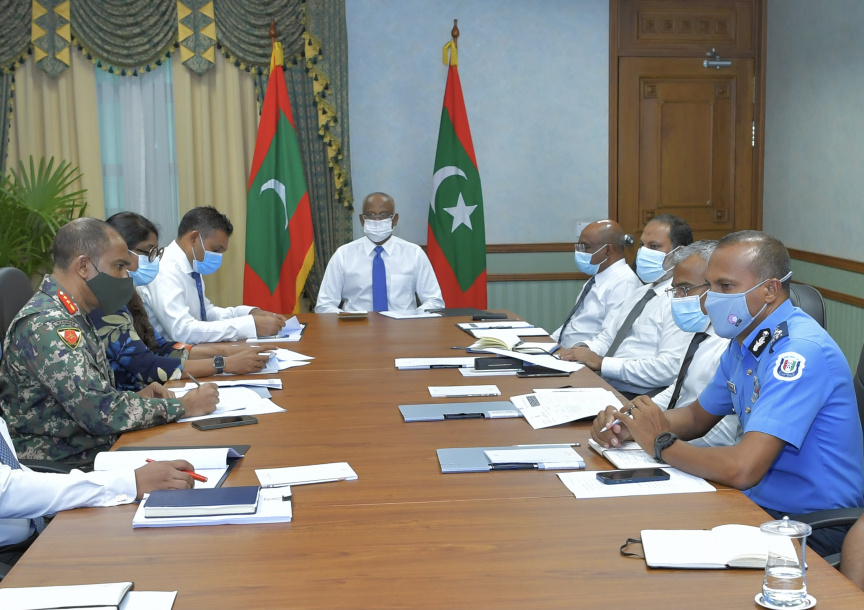 President Ibrahim Mohamed Solih (C) convenes the National Security Council to discuss the findings of the parliamentary inquiry on the May 6 attack on July 12, 2021. (Photo/President's Office)

President Ibrahim Mohamed Solih, on Monday, convened the National Security Council to discuss implementation of the recommendations made by Parliament’s Security Services Committee following its inquiry into Speaker, former President Mohamed Nasheed’s security breach in relation to the IED attack on May 6.

The redacted version of the inquiry report was released to the public on Friday, and President Solih was officially presented with the original inquiry report last Sunday.

He convened the National Security Council to discuss the findings of the inquiry on Monday.

According to the President’s Office, the National Security Council discussed conducting further research on the committee’s recommendations, and on how to proceed with implementing the recommendations.

President Solih, when he was presented with the inquiry report on Sunday, provided assurance he will look into the issues highlighted in the report and take corrective action where possible.

He also promised to share the report with the National Security Council and expedite the implementation of recommendations related to national security.

The attack on May 6 involves a homemade remote-controlled IED strapped to motorcycle parked nearby Nasheed’s residence, which was detonated at 08:27 pm, just as Nasheed, 54, exited his residence and went to get in his car. Nasheed was thrown to the ground and sustained multiple shrapnel wounds, while three members of his security detail and two bystanders sustained minor wounds.

'Yameen’s reinvestigation is a 'diversion tactic'