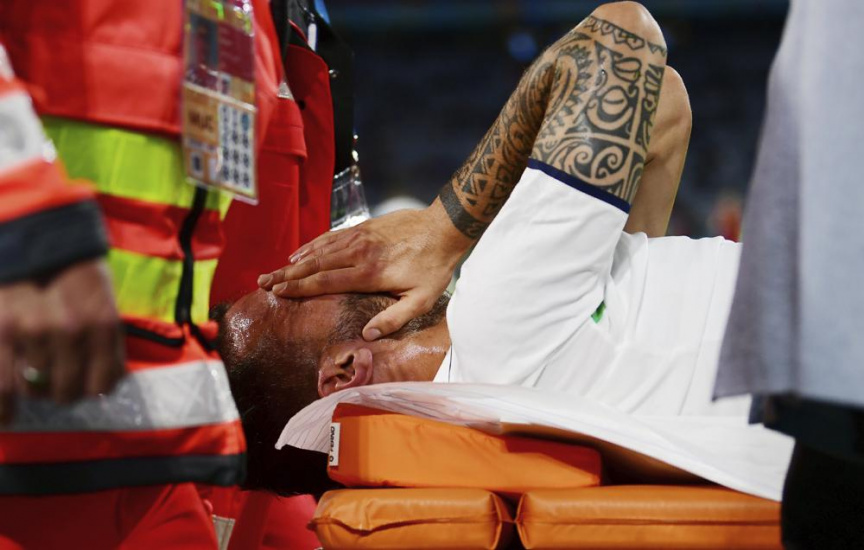 Italy's Leonardo Spinazzola covers his face after injuring during the Euro 2020 soccer championship quarterfinal match between Belgium and Italy at at the Allianz Arena in Munich, Germany, Friday, July 2, 2021. (AP Photo/Philipp Guelland, Pool Photo via AP)

Spinazzola injured the tendon in his left leg in Italy’s 2-1 win over Belgium on Friday in the quarterfinals of the European Championship.

The 28-year-old Spinazzola was in tears when he was taken off the field on a stretcher but he posted a photo on Instagram of himself smiling from his hospital bed after the surgery in Turku.

“Surgery done perfectly. I thank everyone for showing me such support, there have really been so many of you,” Spinazzola wrote. “The countdown has begun we’ll see each other soon.”

Spinazzola’s injury affected the Italy players, who were upset for their teammate after the match. But it has also given them extra drive ahead of the semifinal match against Spain on Tuesday.

“We have an added motivation: getting to the final so we can dedicate it to Leonardo Spinazzola,” Italy defender Leonardo Bonucci said Monday. “Because it really was a tough blow to lose him to injury.

“But he has also shown great strength to us, giving us energy even today after his surgery, telling us to enjoy it. He wants us to make it all the way and we owe it to him to do that.”