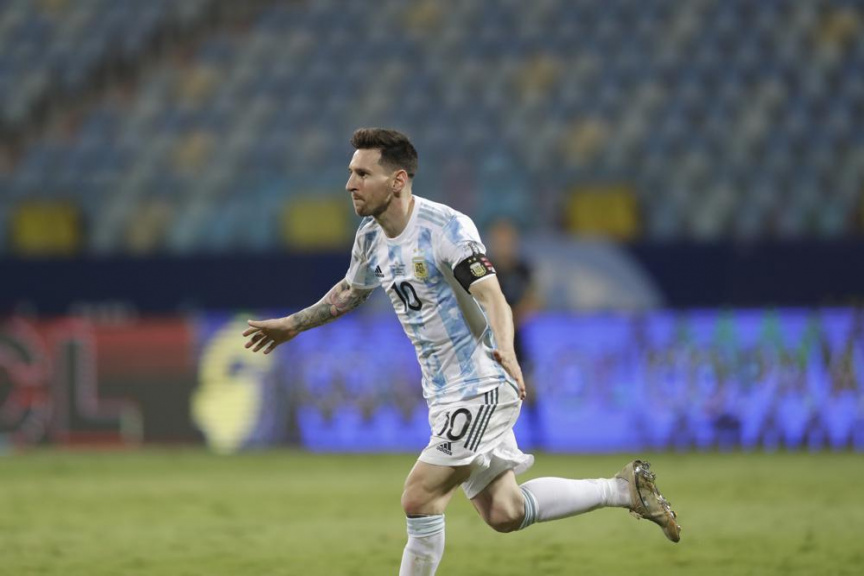 RIO DE JANEIRO (AP) — Lionel Messi scored his 76th international goal and is now only one shy of Pele for the South American record as Argentina beat Ecuador 3-0 on Saturday to progress to the semifinals of the Copa America.

Messi scored from a late freekick and earlier laid on two assists as Argentina eventually subdued Ecuador and kept the superstar’s dream of winning his first major international title alive.

Argentina’s rival at the Mané Garrincha Stadium on Tuesday will be Colombia, which earlier overcame Uruguay on penalties. The other semifinal will feature defending champions Brazil and Peru.

Rodrigo de Paul opened the scoring at the Olimpico Stadium in Goiania in the 39th minute, tapping into an empty goal before Lautaro Martinez added the second in the 84th with a blast from close range. Messi, in his first match since his contract with Barcelona expired, assisted both of them.

In the dying moments of the match Messi scored Argentina’s third from a free kick from the edge of the box. It was his fourth goal in the tournament.

Heavily favored Argentina wasted several opportunities at 1-0 to cruise to a comfortable victory. Ecuador then hit the post in the second half before Martinez doubled Argentina’s lead. But Messi became more influential after 71 minutes when Ángel di Maria stepped in replacing Giovani lo Celso.

Ecuador also lost defender Piero Hincapié to a red card near the end of the match after a foul on Di Maria that gave Argentina the free kick scored by Messi.

It was his 76th goal in his 149th match for Argentina, one short of Pelé’s record as top goal scorer of a South American national team. It was also his 58th career goal on a free kick for club and country, moving one ahead of Cristiano Ronaldo.

Messi said being in the semifinals was one of Argentina’s objectives for the tournament.

“Now we have to rest and think of Colombia. They defend well, they have quick counters,” the striker said. Asked about his performance, he was brief: “Individual awards are secondary.”

Martinez seems to have understood the message.