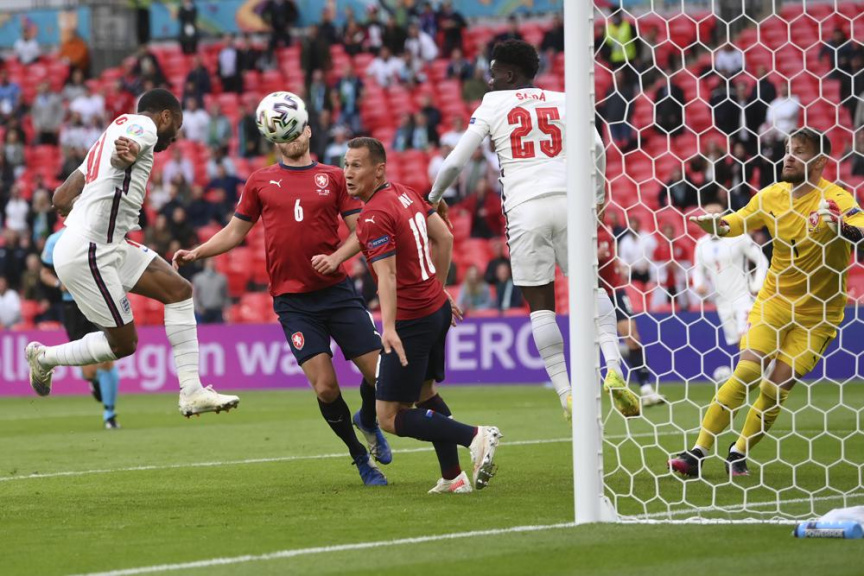 LONDON (AP) — At least England now knows it can rely on Raheem Sterling for goals.

The scoring touch missing at his last three tournaments has been rediscovered on home territory, and it gave his team first place in its group.

It was Sterling’s second goal at Euro 2020 and it secured a 1-0 victory over the Czech Republic on Tuesday in a match at Wembley Stadium between two teams that were already assured of their places in the round of 16.

“We have always felt we can’t have all the scoring burden being with Harry (Kane),” England coach Gareth Southgate said.

The header at the far-post from Jack Grealish’s cross in the 12th minute moved England onto a path where its only game away from Wembley will be a potential quarterfinal match in Rome.

Home comforts should certainly help Sterling, who grew up in the shadow of the Wembley arch and is proving to be England’s game-changer.

How unlike the 2014 and 2018 World Cups, and Euro 2016, when Sterling was unable to find the net. This time, it was his goal that also clinched the opening win over Croatia.

The Manchester City player is stepping up as Kane, the 2018 World Cup Golden Boot winner, endures a barren run in front of goal.

Kane at least managed his first shot on target of Euro 2020 against the Czechs after failing to do so against Croatia and in the 0-0 draw with Scotland.

“We kept the ball better today and there were more attacking options,” said Sterling, who chipped goalkeeper Tomáš Vaclík but hit the post in the opening minutes.

Beyond Sterling’s goal, there wasn’t much for the pandemic-restricted crowd of about 20,000 to celebrate. What did get them cheering were goal updates being flashed on the big screens as Scotland lost to Croatia 3-1 and was eliminated as the last-place team.

The goals in Glasgow had big implications for the Czechs, who dropped from first place to third and are uncertain about where their last-16 game will be.

England now has a week off playing before hosting the runner-up from Group F on Tuesday. That opponent could be World Cup champion France, defending champion Portugal, Germany or Hungary, and the permitted crowd will be rising to 45,000.

“At some point you are going to have to face the best teams,” Sterling said. “That’s the whole point of being in the tournament, which is to challenge yourself.”

Finishing at the top also allows time for backup left back Ben Chilwell and midfielder Mason Mount to complete their self-isolation on Monday after being deemed close contacts at last week’s game with Scotland midfielder Billy Gilmour, who tested positive for the coronavirus.#

The absence of Mount opened up new opportunities in the lineup with Grealish handed his first start of the tournament. Bukayo Saka made his first appearance and helped to inject some of the attacking impetus missing against Scotland.

“Saka and Grealish got in the pockets really well, turned and got on the ball,” Sterling said, “and it’s brilliant to have players around you who can create goals.”

Saka, a 19-year-old Arsenal winger, was named UEFA’s player of the match.

“Of course with us qualifying before the game we had a lot more freedom,” Saka said.

There was also the return from injury for Harry Maguire after six weeks. And it was the central defender’s long throughball that created the openings so-needed for Kane. But the captain’s shot went straight at Vaclík.

Despite the lack of goals from the English, the three clean sheets are encouraging. The latest was protected by the only real moment of danger goalkeeper Jordan Pickford faced when he stretched to block a rising shot from Tomáš Holeš in the 28th minute.

“The finishing wasn’t really great,” Czech Republic coach Jaroslav Šilhavý said through a translator, “and England was stronger in that aspect.”

Lewandowski, Poland out of Euro with 3-2 loss to Sweden