Lewandowski, Poland out of Euro 2020 with 3-2 loss to Sweden 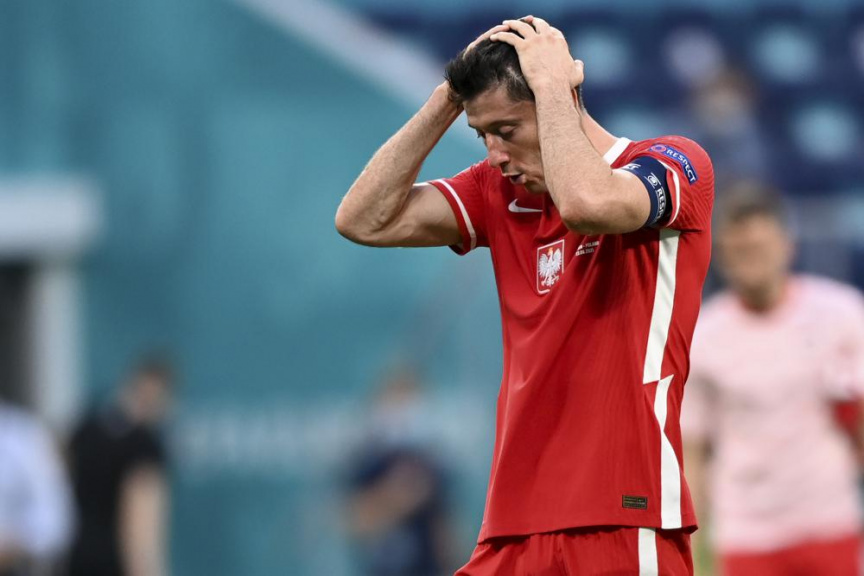 ST. PETERSBURG, Russia (AP) — Robert Lewandowski had just headed the ball off the crossbar twice in as many seconds when it landed back at his feet.

Standing right in front of Sweden’s goal, surely the world player of the year couldn’t fail to score again? Incredibly, he could.

Desperate to make amends for possibly the most embarrassing misses of his career, the Poland striker then scored twice in a wild, end-to-end match at the European Championship on Wednesday, but it still wasn’t enough.

Viktor Claesson, not Lewandowski, had the final say at Saint Petersburg Stadium with a goal in the fourth minute of stoppage time to give Sweden a 3-2 victory and first place in Group E.

For Sweden, it’s a trip to Glasgow for a last-16 match against Ukraine on Tuesday. For Poland and Lewandowski, it’s another early exit from a major soccer tournament.

The Bayern Munich striker leaves Euro 2020 with three goals, his best haul at a World Cup or European Championship, but he looked close to tears as he applauded Poland’s fans after the final whistle.

“The fact this is my best Euros because I scored three goals doesn’t comfort me at all,” he said. “I would give all these goals for qualification for the next round.”

Lewandowski couldn’t have given any more, leading Poland’s comeback from a 2-0 deficit with a curling shot into the top corner in the 61st minute and then a calmly taken equalizer in the 84th. He dropped deep to collect the ball and drive forward. He exhorted his teammates with clenched fists. He whirled his arms to lift Poland’s supporters.

Despite all that, his performance still might best be remembered for that extraordinary sequence of events in the 17th minute when the most prolific scorer in Europe this season couldn’t score into an empty net.

Not once, but twice.

After heading a corner against the crossbar from about 7 meters out, the ball rebounded straight back to Lewandowski but he could only head the ball onto the same part of the goal frame. What came next was almost farcical, as the ball got trapped between his legs and then went through the legs of Poland teammate Grzegorz Krychowiak, too.

There was audible shock, and even some laughs, inside the stadium as replays were shown on the big screens.

Emil Forsberg had already scored for Sweden by then, after 81 seconds for the second quickest goal in the tournament’s history. He added a second in the 59th on a counterattack.

Poland, which collected one point from its first two games, needed a win to advance but missed a slew of half-chances before Claesson, a substitute, broke free down the left for a goal that changed so much.

It lifted Sweden back above Spain, which was easing to a 5-0 win over Slovakia in a match being played simultaneously. Spain would have finished first in the group if not for Claesson’s goal.

“My players are warriors,” Sweden coach Janne Andersson said. “They way they sacrificed themselves for each other, they deserve so much praise.”

It is more disappointment at international level for Lewandowski, who was coming off a record-breaking year at Bayern when he scored 41 goals in a single Bundesliga season. He moved into third place, behind only Cristiano Ronaldo and Lionel Messi, for goals scored in the Champions League, and now has 69 goals for his country in 122 games.

But it seems he will just have to settle for being a title-winner at club level. In four appearances at a major tournament with Poland, Lewandowski has departed from the group stage three times.

He is now 32, with perhaps only two major international tournaments left in him — if Poland qualifies, that is.

Like Lewandowski, Forsberg has three goals at Euro 2020, as well as has the honor of scoring the quickest goal in this year’s tournament.

Only Russia player Dmitry Kirichenko — in 2004 against Greece — has scored a faster goal than Forsberg, who collected a bouncing ball from Alexander Isak’s blocked shot and converted a low, left-footed finish.

The winger put Sweden ahead 2-0 by curling in a low shot at the end of a break led by substitute Dejan Kulusevski.

Seeking to make amends, Lewandowski almost single-handedly brought Poland back to the game.

One more goal would have completed a remarkable story of redemption for the striker after his early misses.

“I feel this team deserved more,” Lewandowski said. “Maybe not applause, because we are out, but for all that we gave here, the reward is too small.”