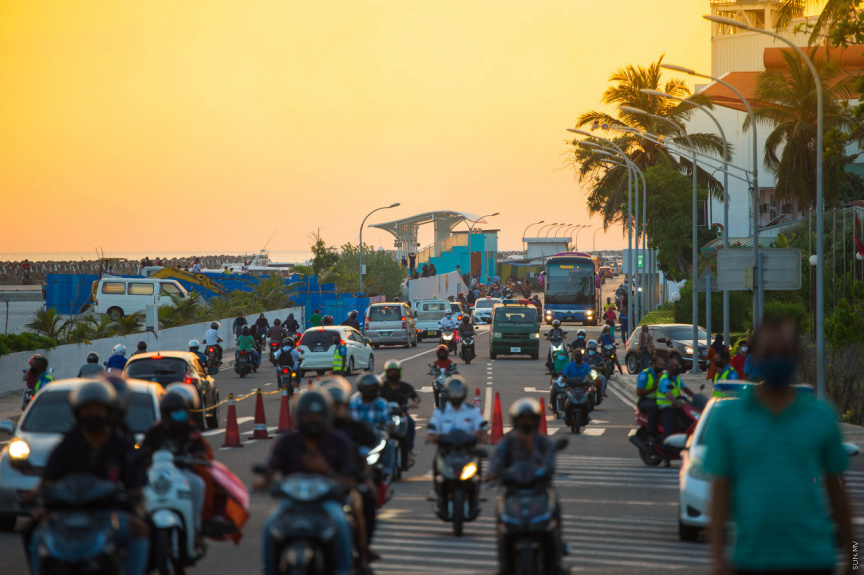 People wear masks as they drive along a road in Male' City on March 2, 2021. (Sun Photo/Fayaz Moosa)

Maldives has eased some of the restrictions imposed in the capital, including shortening hours and allowing gyms to reopen.

Maldives strengthened restrictive measures, especially in the congested greater Male’ region, following a surge in COVID-19 cases last May. Authorities offered a slight ease in the measures last week, including shortening the curfew, reopening mosques for individual worshippers, and allowing people four hours to go out unaccompanied for exercise.

Mabrook said that starting Wednesday, the curfew hours in the capital will be shortened to 18:00-04:00 hours.

He stressed that though people are being allowed two extra hours to conduct their business and access essential services, going out during non-curfew hours will continue to require a police-issued permit.

Mabrook said that with the change, the household permits issued for 12:00-16:00 hours can hereafter be used until 18:00 hours.

Meanwhile, cafes and restaurants will be allowed to provide takeaway services until 18:00 hours.

Authorities have also decided to allow gyms in the greater Male’ region to reopen.

Mabrook said that gyms will be allowed to reopen once they submit a service plan which falls in line with Health Protection Agency (HPA)’s guidelines and pass inspection.

Gyms will be allowed to operate from 05:00-18:00 houurs, and will need to offer services based on appointments.