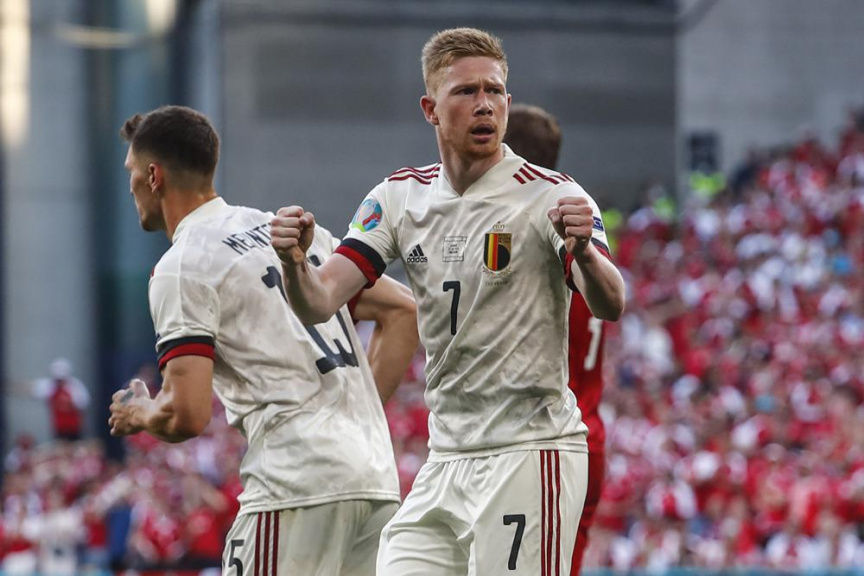 COPENHAGEN (AP) — When the game was over, Denmark’s players walked around the field to a standing ovation from a crowd that serenaded them as if they had just won the European Championship.

The scoreboard on the big screens inside Parken Stadium told a different story: Belgium 2, Denmark 1. But in many ways, this felt like a win for Denmark’s team — and its fans — on a day when soccer became fun again.

“I can’t describe the pride I feel for this squad,” Denmark coach Kasper Hjulmand said. “Four days after almost losing one of their best friends, they get up and play a game like this.”

It was Denmark’s first game since Christian Eriksen collapsed during the team’s opening Euro 2020 match against Finland. Eriksen had to be resuscitated with a defibrillator after suffering cardiac arrest and is still recovering in the hospital.

Days later, with tributes continuing to come in from just about everywhere, Denmark nearly rode the raucous atmosphere at Parken Stadium to an improbable win over top-ranked Belgium.

Yussuf Poulsen gave Denmark the lead in only the second minute but substitute Kevin De Bruyne turned the game around in the second half, setting up the equalizer for Thorgan Hazard before scoring the winner himself in the 71st minute.

With Eriksen recovering well, this game was about bigger things than the result.

In a sign of how Eriksen’s collapse has affected all teams at the tournament, the game was halted just after 10 minutes for a minute’s applause by the entire stadium. The 25,000 fans rose as one and started clapping as the clock ticked past 9:59 and Belgium soon stopped play as they were preparing an attack. The players from both teams joined in the applause.

It was a pre-planned gesture to honor Eriksen, who wears the No. 10 shirt for Denmark and was in a hospital close enough to the stadium to be able to hear the crowd.

The atmosphere carried Denmark forward as the hosts started with a frenetic intensity, and Poulsen delivered the early lead with a low shot inside the far post.

”The fans created an incredible atmosphere,” Belgium coach Roberto Martinez said. ”And the fans gave the home team a one-goal lead. And at that point we were a little bit shell shocked.”

Things changed completely when De Bruyne came on after the break for his first appearance since sustaining a facial fracture during the Champions League final. The Manchester City midfielder went around a defender inside the area in the 55th minute before teeing up Hazard, who slotted it past a scrambling Kasper Schmeichel.

After netting the winner with a low shot from the edge of the area, De Bruyne ran toward the Belgium fans but didn’t celebrate the goal, pushing in hands down in a calming motion out of respect for Eriksen.

”You never doubt his talent, but obviously it’s a big ask to come on at halftime and be able to affect the game the way he did,” Martinez said about De Bruyne.

Braithwaite had Denmark’s best chances for an equalizer, but one shot was saved by Thibaut Courtois in the 75th and a later header glanced against the crossbar in the 87th.

The victory give Belgium a spot in the round of 16 with six points from two games. Denmark can still finish second in the group with a win over Russia on Monday if the Belgians beat Finland. Russia and Finland both have three points, Denmark has zero.

”We’re going to stick together and beat the Russians,” Hjulmand said. ”We’re not done in this competition.”

Hjulmand had said earlier that he expected Eriksen to watch the game wearing his Denmark shirt. And Braithwaite said Eriksen had already sent his teammates his support after the game.

“He sent us a message in the WhatsApp group,” Braithwaite said. “I think he said that we were really awesome.”