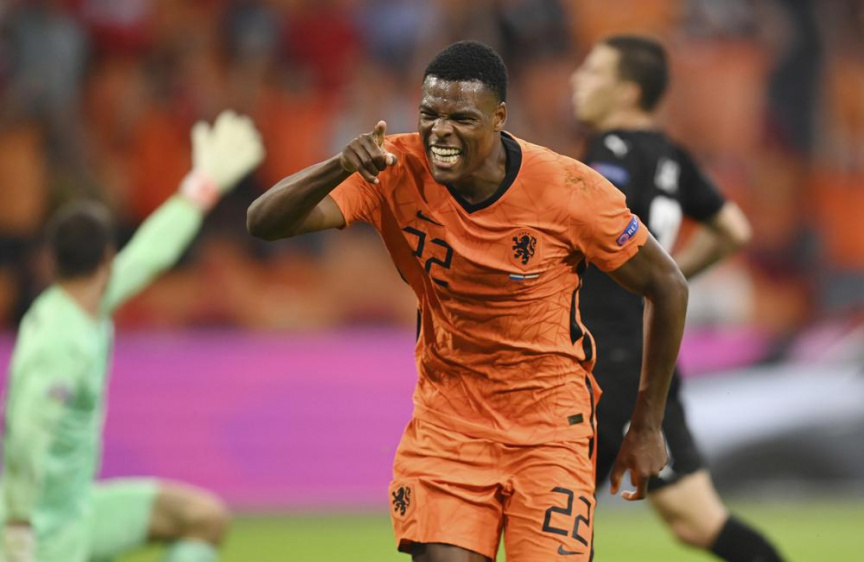 Denzel Dumfries of the Netherlands celebrates after scoring his side's second goal during the Euro 2020 soccer championship group C match between the The Netherlands and Austria at Johan Cruijff ArenA in Amsterdam, Netherlands, Thursday, June 17, 2021. (John Thys, Pool via AP)

AMSTERDAM (AP) — This time, the Netherlands never looked like throwing away their two-goal lead.

Memphis Depay and Denzel Dumfries scored a goal in each half as the Dutch comfortably beat Austria 2-0 Thursday to advance to the round of 16 at the European Championship.

“We showed some different qualities today,” Netherlands coach Frank de Boer said. “Defensively we were much better than (against) Ukraine.”

Depay sent a penalty kick low into the corner in the 11th minute for his 27th goal in 66 international matches. Dumfries then scored his second goal of the tournament — following his late winner against Ukraine — in the 67th after an unselfish pass from PSV Eindhoven teammate Donyell Malen.

A foul by Austria captain David Alaba on Dumfries earned the Dutch penalty at the Johan Cruyff Arena, although only after referee Orel Grinfeeld had a second look at the incident on a screen.

Dumfries, a wing back who has played a role in all five Netherlands goals at the tournament, was asked after the match if his tournament was beginning to resemble a boyhood dream.

“It’s starting to look that way,” he said.

The Netherlands is playing at a major international soccer tournament for the first time in seven years and qualified for the knockout stage with a game to spare. The Dutch, whose only major tournament victory came at the 1988 European Championship, finished third at the 2014 World Cup in Brazil.

Austria rarely threatened to equalize against a well-ordered Dutch defense led by Matthijs De Ligt on his return from a groin injury.

“He made a couple of interventions where you could see his power, his speed, his strength in the air,” De Boer said of the Juventus player.

The closest Austria came was a long-range shot by Alaba in the 82nd minute. The team had slightly more possession than the Netherlands but only managed one shot on target in the entire game.

“We didn’t create real chances,” Austria defender Aleksandar Dragović said. “We have to work on that.”

Austria was playing without Marko Arnautović. The forward was handed a one-match ban by UEFA for insulting a North Macedonian player in the teams’ Euro 2020 opener. The incident soured Austria’s first victory at a major tournament in 31 years and its first ever at the European Championship.

Dumfries is a wing back who can sprint up the right flank and cause problems in the opponent’s penalty area.

The Dutch also led 2-0 in their opening match on Sunday, but Ukraine scored a pair of goals level at 2-2. Dumfries scored the winner in the 85th minute on that day.

The Netherlands will play its final Group C match against North Macedonia on Monday, also in Amsterdam. Austria will take on Ukraine in Bucharest.

“We still have it in our hands to qualify for the round of 16,” Austria coach Franco Foda said.