‘Freedom Day’ for England pushed back 4 weeks to July 19 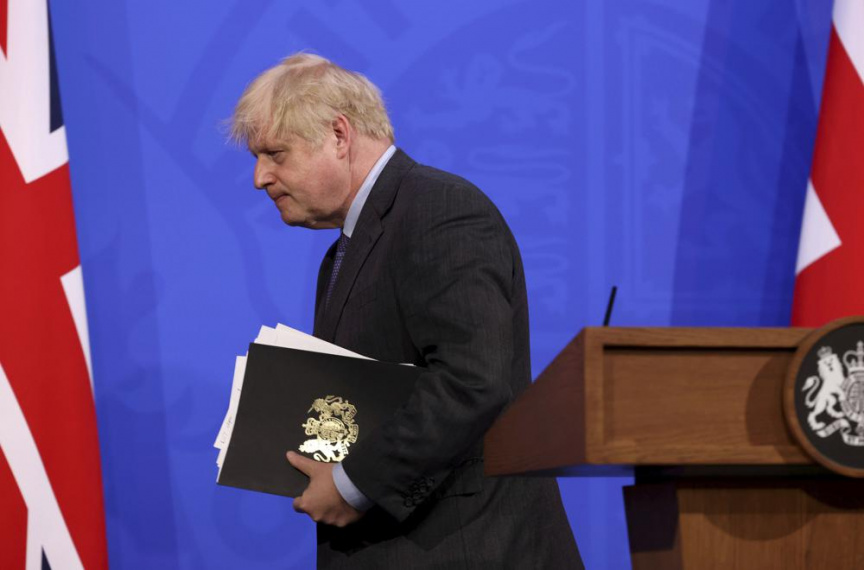 LONDON (AP) — British Prime Minister Boris Johnson confirmed Monday that the next planned relaxation of coronavirus restrictions in England will be delayed by four weeks, until July 19, a decision he said will save thousands of lives as the government speeds up its vaccination drive.

In a press briefing, Johnson voiced his confidence that the new date for the lifting of restrictions on social contact will be the final one as the vaccination drive is accelerated to counter the delta variant that scientists reckon is between 40% and 80% more transmissible than the previous dominant strain in the U.K.

“I think it is sensible to wait just a little longer,” he said. “Now is the time to ease off the accelerator, because by being cautious now we have the chance in the next four weeks to save many thousands of lives by vaccinating millions more people.”

He said that by July 19, two-thirds of the adult population will have been double-vaccinated, including everyone over the age of 50, and that everyone over the age of 18 will have been offered a jab, earlier than the previous target of the month’s end. The gap between the two doses for over 40s is also being reduced to eight weeks from 12 to provide the maximum protection against the variant sooner.

“It’s unmistakably clear the vaccines are working and the sheer scale of the vaccine rollout has made our position incomparably better than in previous waves,” Johnson said.

Under the government’s plan for coming out of lockdown, all restrictions on social contact were set to be lifted next Monday. Many businesses, particularly those in hospitality and entertainment, voiced their disappointment about the delay to what had been dubbed by the British media as “Freedom Day.” Composer Andrew Lloyd Webber has been particularly upset at the prospect of a delay and has said he will reopen his theaters regardless, a move that would risk him being arrested.

A delay is particularly bitter pill for nightclubs, as they have not been allowed to reopen since March 2020.

It will also likely impact how many fans are allowed into the Wimbledon tennis tournament and the European Championship soccer matches at Wembley Stadium, which will host the tournament’s semi-finals and final. However, actual numbers may be higher at certain events as Johnson said the government will carry on with its test program to allow more fans into stadiums.

The Confederation of British Industry said the delay is “regrettable” but “understandable” and urged the government to provide more support to those businesses affected.

“But we must acknowledge the pain felt by businesses in hospitality, leisure and live events,” said the CBI’s director-general Tony Danker. “At best they’re operating with reduced capacity hitting revenues, and at worst, some aren’t open at all.”

When Johnson first outlined the government’s four-stage plan for lifting the lockdown in England in February, he set June 21 as the earliest date by which restrictions on people gathering would be lifted. However, he stressed at the time that the timetable was not carved in stone and that all the steps would be driven by “data not dates” and would seek to be “irreversible.”

Though daily infections have increased threefold over the past few weeks they are still way down from the nearly 70,000 daily cases recorded in January. On Monday, the British government reported 7,742 new confirmed cases, one of the highest daily numbers since the end of February. The delta variant accounts for around 90% of all new infections. The number of peopled being hospitalized with the virus has edged up over recent days.

Many blame the Conservative government for the spike, saying it acted too slowly to impose the strictest quarantine requirements on everyone arriving from India, which has endured a catastrophic resurgence of the virus.

Despite the government having faced criticism for that decision, it has won plaudits for the speedy and coherent rollout of vaccines. As of Monday, around 62% of the British population had received one shot, while about 45% had got two jabs.

The rapid rollout of vaccines and a strict months-long lockdown helped drive down the number of virus-related deaths in the U.K. in recent months. Despite that, the country has recorded nearly 128,000 virus-related deaths, more than any other nation in Europe.

But infections are now going the wrong way, upending the government’s plans as well as those of many businesses.

“The reality is we have marched the troops up the hill,” said Howard Panter, joint CEO and creative director at theater operator Trafalgar Entertainment.

UK lawmaker claims she was fired over her Muslim faith