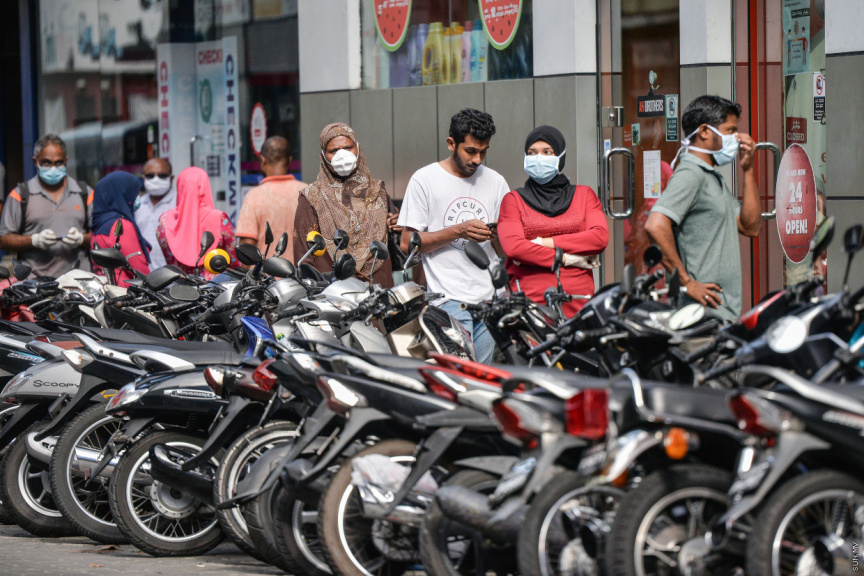 Customers queued outside a grocery store in Male' City amid a lockdown on the capital on April 22, 2020. (Sun Photo/Fayaz Moosa)

Small businesses such as retail shops and cafes, restaurants were the hardest hit from the first wave of COVID-19 to hit the Maldives last year.

As the third quarter of the year ended, these businesses were finally granted the much-needed breathing space to reopen their businesses and start operations to recover the losses from the first wave, only to be hit with another wave later on.

Measures to control the COVID-10 situation in the Maldives effectively banned dine-in services at restaurants, restricted movement of people outdoors leading to shortages of customers, and even limited operational hours for shops. The government had previously provided relief packages targeted for SMEs.

Finance Ministry statistics show that 2,114 SME businesses had been injected with MVR 361.3 million as financial assistance COVID-19 relief loans. Bigger businesses were provided MVR 585.9 million through the Bank of Maldives.

The government has once again announced that relief loans would be provided for businesses to assist in overcoming the brunt of the COVID-19 situation. In a press conference held yesterday, President Ibrahim Mohamed Solih himself announced that the SME bank would start issuing loans for SME businesses this month and the next. BML will once again be issuing loans for bigger businesses, according to the President.

BML has announced a loan package of USD 10 million, with the assistance of the OPEC fund, for businesses related to the tourism sector. Details of the package are to be announced later on.

"I previously noted the difficulties faced by small businesses especially, because of the renewed COVID-19 wave. God willing, we will commence issuing loans this month for these businesses. Stimulus loans will be announced through the BML in June, we will issue if I remember, 380 million,"

"Other than this, we will commence working on issuing loans for small and medium businesses through the SME bank. We have a package announced for the months of June and July," said the President.