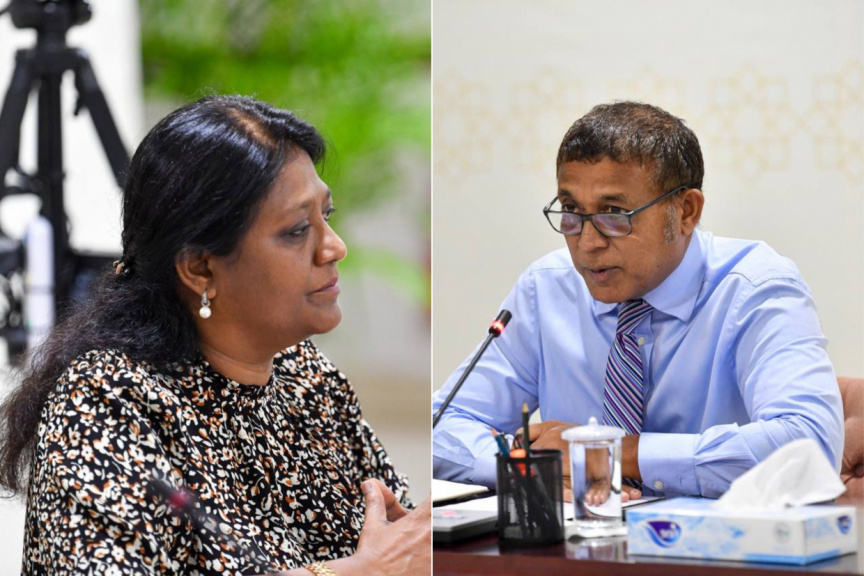 Combined photo: Minister of Housing and Planning Mohamed Aslam (R) and former Mayor of Male' City Shifa Mohamed (L) summoned to the parliamentary inquiry into the bomb blast targetting former President and current Speaker of the Parliament Mohamed Nasheed on May 6.

Minister of Housing and Planning Mohamed Aslam and former Mayor of Male' City Shifa Mohamed have been summoned today to the parliamentary inquiry into the bomb blast targetting former President and current Speaker of the Parliament Mohamed Nasheed on May 6.

The Parliament's Committee on National Security Services (241 Committee, is conducting an inquiry into the terror attack. Nasheed suffered life-threatening wounds from the attack and is now in Germany receiving treatment after undergoing critical procedures at the ADK Hospital in the Maldives.

Shifa and Aslam were summoned to the inquiry today after the Defense Ministry previously said that it had informed the Council that providing security for Nasheed near his residence in Neeloafaru Hingun, where the bombing happened, was difficult due to the narrow alleyway and the parked motorcycles.

The requested changes by the Defense Ministry had not been implemented by when the bombing happened.

Former Mayor Shifa had previously said that the Council had requested the Planning Ministry to designate the Billoorijehige building nearby Neeloafaru Hingun as a parking lot, in order to facilitate the Defense Ministry request to create a no-parking zone in Neeloafaru Hingun.

The Council has previously said that the Planning Ministry had not cooperated appropriately with the Council in its request to hand over Block 139 where the Billoorijehige building was located in, in order to designate a parking lot in the area.

Commissioner of Police Mohamed Hameed had also been summoned to the parliament inquiry yesterday. The inquiry will be focused on five areas according to the Committee, including whether the security forces or any state body had prior knowledge of the attack, the standards for the security forces in providing protection, conduct, and standards of the protection provided to Nasheed, how finance and intelligence information is collected and how much compliance was there towards legal requirements and necessities.

Police: All actively involved in May 6 attack arrested