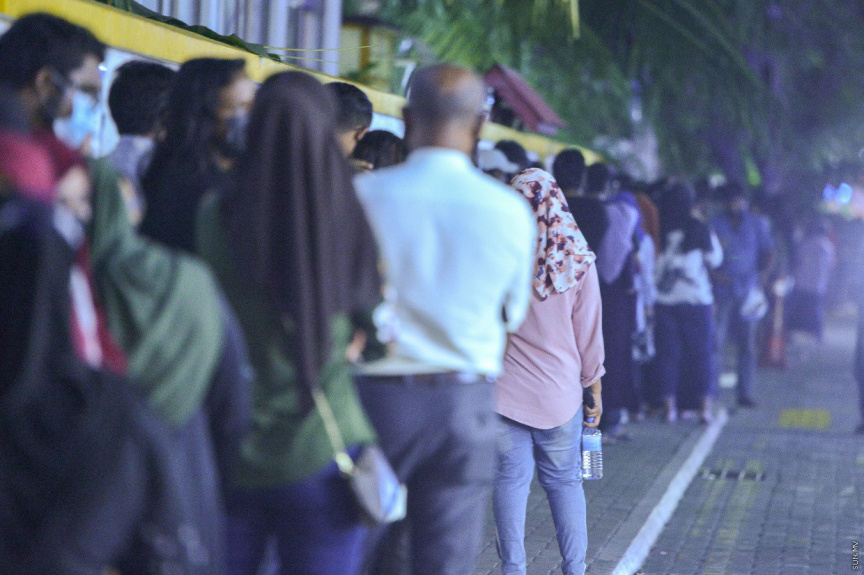 People queued up outside a vaccine center in the Greater Male' Area of the Maldives on May 1, 2021. (Sun Photo/Fayaz Moosa)

Health Protection Agency (HPA) has stated that 70 percent of those eligible for the second dose of the Sinopharm COVID-19 vaccine in the Greater Male' Area are yet to receive their second dose.

Vaccinations of the Covishield vaccine are currently halted as the Maldives waits for the next shipment with no official confirmed date. However, the Sinopharm vaccine is still being administered. Currently, more than 77,662 people have received the first dose of the Sinopharm vaccine.

Around 70 percent of those who are currently eligible for the second dose of the same vaccine have not yet received it, according to the HPA.

The HPA has previously stated that the second dose is to be received after three weeks of the first dose in order to completely vaccinate against COVID-19.

The situation with the virus in the Maldives is bad, according to the authorities. The number of positive cases and deaths from the virus has increased significantly recently as the nation battles a fourth wave of the virus. Authorities have repeatedly advised the public to innoculate against the virus.

Around 30 percent of the eligible vaccine population have not yet received a single dose of the vaccine, according to health authorities.

G-7 nations gather to pledge 1B vaccine doses for world

500,000 doses of Astrazeneca vaccine due in July