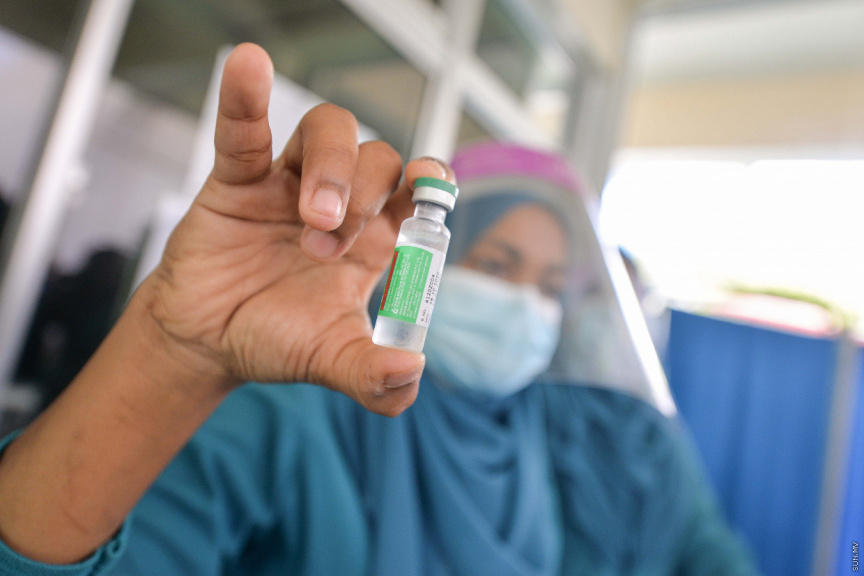 A nurse holds a dose of Covishield vaccine before administering it to a professional working in the tourism sector on February 4, 2021. (Sun Photo/Fayaz Moosa)

The Health Protection Agency (HPA) has announced that the Maldives could receive its next batch of Covishield vaccines after two weeks, after temporarily halting inoculations with the vaccine.

The administration of the Covishield vaccine (Astrazeneca-Oxford University vaccine) was halted today in the Greater Male Area.

In a statement issued to the media, HPA stated that arrangements were being made for the procurement of the next shipment of vaccines to the Maldives which could take around two weeks.

The statement also read that open access vaccination would be halted but vaccines would still be administered in emergency situations and special circumstances.

The cease in vaccinations was due to difficulties in the supply of vaccines from India during the severe situation with the virus in the country, which is the biggest producer of the vaccine.

It further read that all nations were facing difficulties and obstructions in the supply, manufacturing, and production of the vaccines during the difficult period with the pandemic.

The Maldives uses the Covishield vaccine, as well as the Sinopharm vaccine for the nationwide vaccine program. The Pfizer vaccine is also being used in special circumstances.

The first dose of the Covishield vaccine was provided by India which supplied 200,000 doses as a donation. The COVAX facility also provided 12,000 doses of the same vaccine.

The government also has an agreement with Astrazeneca in Singapore for the supply of 700,000 doses of the vaccine. Under the agreement, vaccines would be received in June, according to the Health Ministry of the Maldives.

The low stocks of the vaccine were admitted by the government in a press conference yesterday. The statement came after journalists posed questions over the matter in a previous conference just a few days ago which the government refused to specifically state. The Health Ministry refused to state the exact amount of vaccines in the Maldives and stated previously that the current stock would be enough to last until a new shipment arrived. The Ministry officials also stated that the vaccine program of the Maldives would not be interrupted due to a shortage of supply and that the Maldives would not face a shortage of supply.

WHO panel OKs emergency use of Sinopharm vaccine