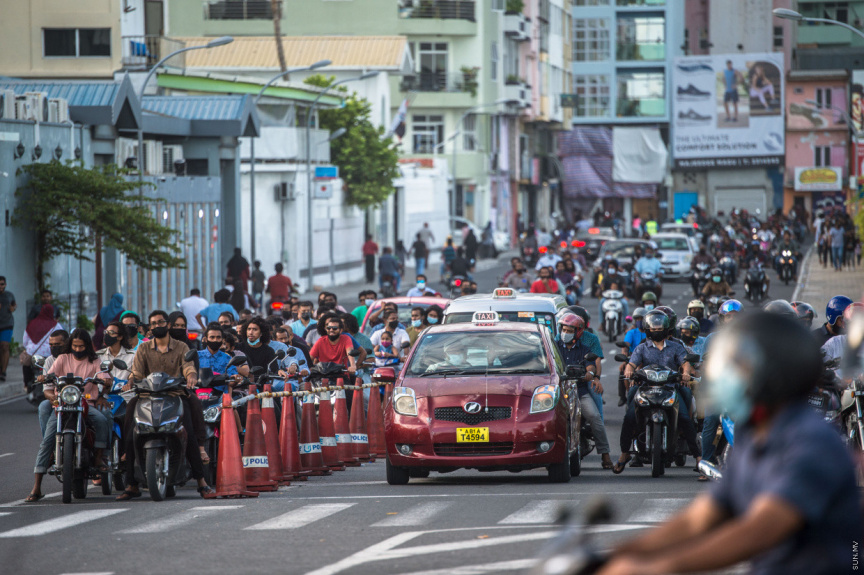 People wear masks as they drive along a road in Male' City on April 19, 2021. (Sun Photo/Fayaz Moosa)

Health Emergency Operations Center (HEOC) warned on Monday that the COVID-19 situation in Maldives may deteriorate to reach the devastating level being experienced in neighboring India.

In a press conference on Monday night, Indhira Gandhi Memorial Hospital (IGMH)’s consultant radiologist Dr. Fathimath Mufliha said that the COVID-19 hospitalization rate in Maldives has tripled over the past two weeks.

She warned the sharp rise in hospitalization rate will overburden the health system.

Maldives has been experiencing a surge in COVID-19 infections in recent weeks – both in the capital and in residential islands outside the capital. The sharp surge in cases comes after restrictions – including travel restrictions from Male’ – the epicenter of the outbreak in Maldives – to other residential islands were eased to hold the Local Council Elections last April.

585 new cases were recorded on Monday alone – the highest single-day spike the country has recorded to date.

“We are now on the brink of the same situation facing India. I believe no one would want us to experience that situation,” said Dr. Mufliha.

She said a unified effort is needed to avoid the situation facing India and Nepal.

“We must all work together to avoid facing the situation that we are seeing in our neighboring countries such as India and Nepal,” she said.

India’s official count of COVID-19 cases surpassed 20 million this Tuesday, nearly doubling in the past three months, while deaths officially have passed 220,000.

The true figures are believed to be far higher.

People are dying because of shortages of bottled oxygen and hospital beds or because they couldn’t get a COVID-19 test.

Dr. Mufliha said on Monday that as the infection rate rises, so will the number of patients who develop serious illness and require oxygen.

She also there is also a chance of a new variant forming in Maldives if the infection rate continues rise at such a rapid rate.

Dr. Mufliha urged everyone to strengthen precautionary measures in order to avoid the situation in Maldives from worsening, and get vaccinated.

Maldives in the midst of a new virus variant