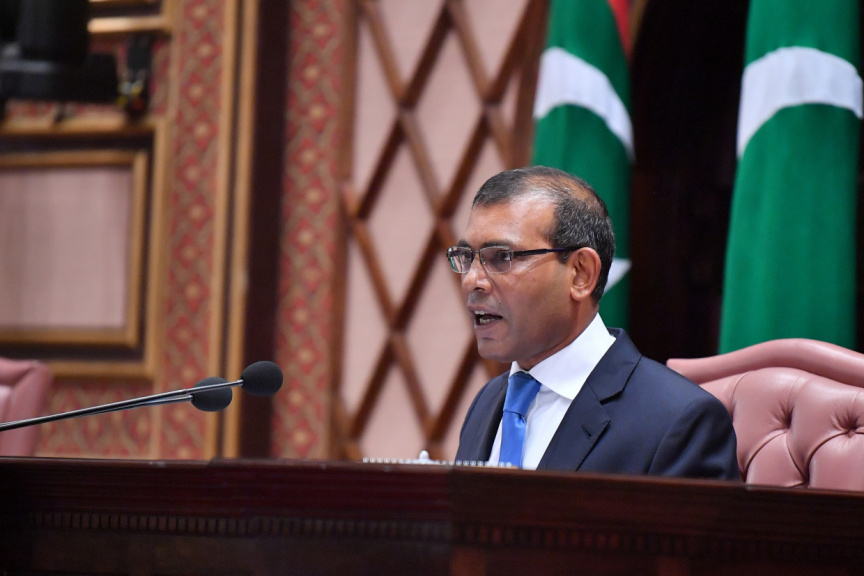 Speaker of the Parliament Mohamed Nasheed has stated that the MMPRC scandal details cannot be kept a secret and that even some parliamentarians could lose their seats for their part in the scandal.

Nasheed, in today's sitting, said that the scandal cannot be kept a secret as long as he remained presiding over the legislature.

"No matter how big the lawmaker is, no matter how big of a prince that person may be, as long as I am sitting here, I will find the truth about it," said Nasheed regarding the scandal.

Nasheed noted that the Asset Recovery Commission had already compiled a list of around 270 individuals, including former and current to level state officials and lawmakers," for their part in the scandal.

"I have no doubt in my heart that those charges will go forward. Some honorable lawmakers may lose their seats. Some members may lose their positions. Others may face other consequences," said Speaker Nasheed.

Nasheed said that the parliament and the government were formed to find the truth behind the scandal and recover the missing funds and said that the cooperation of everyone was to be received for the purpose.

Deputy Speaker of the Parliament Eva Abdulla, speaking in her role as MP for North Galolhu spoke on the issue today.

She said that her trust and faith that any committee of the parliament could be trusted to investigate the scandal had been lost even with the supermajority held by the governing MDP in the parliament.

The issue had heated up in today's sitting after the Speaker requested up-to-date information from government bodies regarding the investigation into the scandal. The Speaker made the request after MP Hassan Latheef requested the information initially.

The request was passed on to the Committee on National Security Services for a matter that was already under investigation by the Committee, according to Committee chair MP Mohamed Aslam.

However, MP Hassan Latheef who also sits on the Committee criticized MP Aslam over the refusal to clarify the information despite Committee members voting to do so.

MP Eva said that the issue was not of the parliament and that the Speaker was doing all he can to clarify the information by sending requests and instructing committees to clarify the matter.

"However, even when sent to these committees, it is not something that can be fooled to us that the process stops from even here," said MP Eva.

She further stated that "I cannot trust any current committee of the parliament can oversee or inquire into this matter. I do not have faith now. I trust in you, so I request for you to preside over this matter and carry out the procedure inside the parliament floor in a transparent manner."

Until now, only one individual is currently in prison for the MMPRC scandal and that is former President Abdulla Yameen who is in prison for money laundering charges. Other known figures include ex-Vice President Ahmed Adeeb and ex-MMPRC head Abdulla Ziyath and businessman Hamid Ismail. They were both convicted of crimes related to the scandal but their sentences were later shifted to house arrest.

The MMPRC scandal saw massive funds received from prospective developers as acquisition costs and other payments of islands to be leased and developed for tourism purposes be rerouted to government officials and others as bribes or payments and for personal gain and wealth.