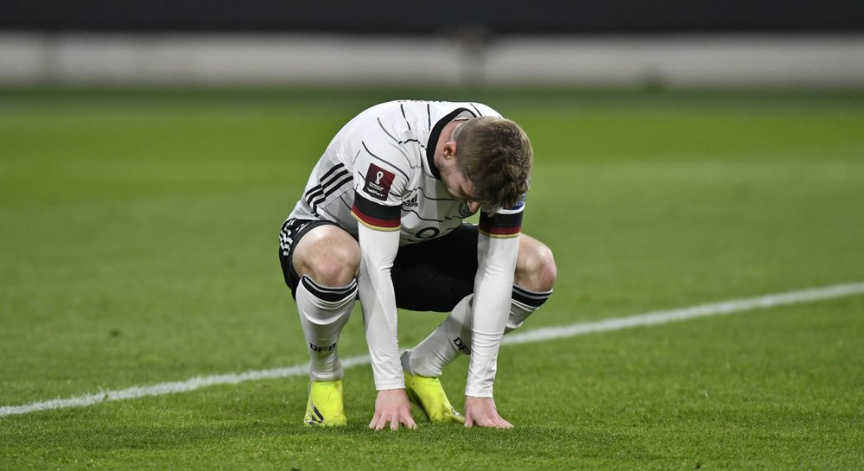 Germany’s first World Cup qualifying loss in 20 years added another blemish to the final months of coach Joachim Löw’s 15-year reign in charge of the team.

Germany’s 35-match unbeaten run in World Cup qualifying — a streak dating back to 2001 — ended with a stunning 2-1 home loss to North Macedonia on Wednesday that left the team sitting third in its group after three games. It was only the country’s third ever loss in qualifying for the World Cup since since 1934, the other two coming against Portugal in 1985, when it was West Germany, and the famous 5-1 thrashing by England 20 years ago.

Löw, who led Germany to the 2014 World Cup title, is stepping down as coach after the European Championship. After exiting the World cup in the group stage in 2018, the Euros could cause the Germans more pain given they are in the same group as reigning champion Portugal and world champion France. In November, they lost 6-0 to Spain for their worst defeat since 1931.

The road to Qatar could be bumpy, too, for Löw’s successor. In Group J, Germany has slumped to third place after three games — behind North Macedonia and 99th-ranked Armenia, which beat Romania 3-2 for a third straight win having trailed after 87 minutes in Yerevan.

Goran Pandev, a 37-year-old striker playing in his 20th year of international football, was part of the North Macedonia team that shocked Germany, scoring the opener in first-half stoppage time.

Ilkay Gundogan equalized from the penalty spot but after Timo Werner missed a golden chance to put Germany ahead and potentially earn the team a 19th straight World Cup qualifying victory, Eljif Elmas scored the winner for North Macedonia in the 85th at the end of a counterattack.

Europe’s other major powers ended the first batch of qualifying games on a successful note, with England, Italy, Spain and France all picking up wins before they switch their focus to the Euros.

Spain’s 3-1 victory at home to Kosovo attracted attention because of the host country’s non-recognition of the visitors, with the Spanish national broadcaster disregarding normal protocol by not mentioning Kosovo as a country and using lowercase letters for “kos” in its graphics.

Spain does not recognize Kosovo’s 2008 independence from Serbia.

John Stones made amends for an embarrassing defensive blunder by setting up a late winner for fellow center back Harry Maguire as England beat Poland 2-1 to stay perfect in Group I.

Stones’ heavy touch at the edge of his own area saw him get dispossessed, leading to Jakub Moder equalizing for Poland to cancel out Harry Kane’s penalty — his 34th goal for England.

Redemption came for the Manchester City defender when his header at the far post kept a corner in play and Maguire swept a finish high into the net in the 85th minute at Wembley Stadium. Poland was without injured star striker Robert Lewandowski.

England leads by two points from Hungary, which won 4-1 at Andorra. Albania rose above Poland into third place by beating San Marino 2-0.

Italy’s unbeaten run extended to 25 games with a 2-0 win in Lithuania as Roberto Mancini’s halftime changes had an immediate impact.

Italy, which failed to qualify for the 2018 World Cup, moved three points ahead of Switzerland atop Group C. Northern Ireland and Bulgaria have a point apiece after drawing 0-0.

Ahead of the Group B game in Seville, the Spanish federation upset Kosovo officials by referring to the country as a “territory.” The Kosovo federation warned it wouldn’t play the match unless Spain pledged to respect the Balkan country’s sovereignty.

Yet commentators on TV referred to the visitors as the “team from the Kosovo federation” during the game, and used phrases like “players from the federation of Kosovo.”

While using “ESP” in uppercase letters for the hosts’ on-screen graphic in Spanish, Spain’s broadcaster kept lowercase “kos” at all times for the visitors.

Dani Olmo, Ferran Torres and Gerard Moreno scored for Spain but the goal of the match was by Besar Halimi, who found the net from about 45 meters after Spain goalkeeper Unai Simón lost possession while trying to play the ball way outside his area.

Spain moved onto seven points and leads by one from Sweden, which has a game in hand. Greece is third after a 1-1 draw with Georgia.

France continued its recovery from an opening-round draw to Ukraine, beating Bosnia-Herzegovina 1-0 to follow up a 2-0 win over Kazakhstan on Sunday.

Antoine Griezmann headed in the winner in the 60th for his 35th international goal, moving the Barcelona forward one clear of David Trezeguet and into fourth place on France’s all-time scoring list.

France is four points clear in Group D, with Ukraine in second place on three points after a third straight draw, this time against Kazakhstan.

Denmark joined Italy, England and Armenia on maximum points and is the highest-scoring team in qualifying with 14 goals.

That’s after a 4-0 win at Austria in Group F, with the goals coming in a 16-minute spell in the second half.

Denmark, which is yet to concede, is already four points clear. Scotland rose to second place after beating the Faeroe Islands, also 4-0.