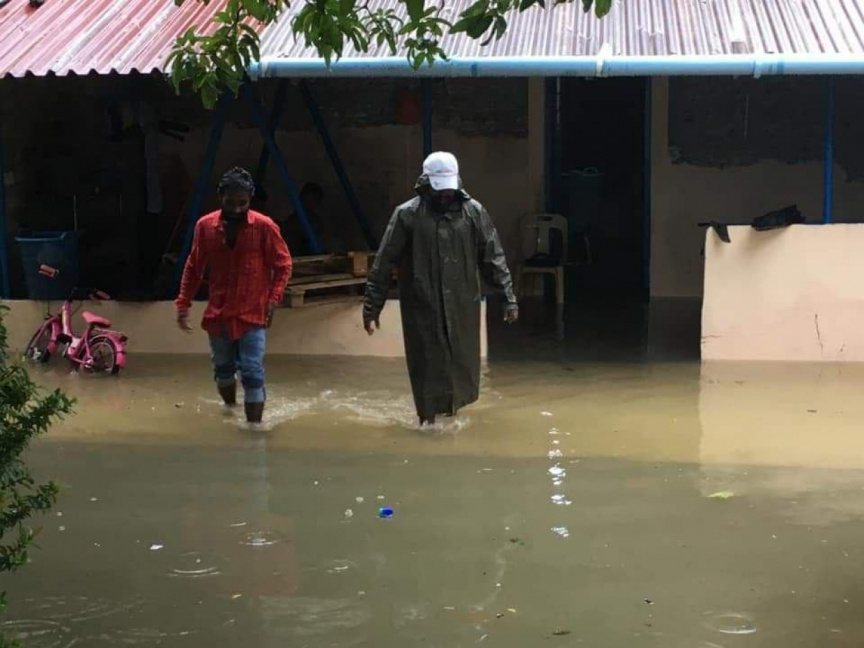 The National Disaster Management Authority (NDMA) has issued a warning to the public for possible flooding due to heavy rains and strong winds that may be experienced across the nation in the next 48 hours.

The Maldives has been experiencing a spell of bad weather with high winds and rough seas, and the weather services of the nation have also issued warnings that wind speeds could increase to up to 55 miles per hour during gusts.

NDMA advised the public to take safety measures for possible flooding which could damage property and goods during the anticipated bad weather. NDMA requested the public to barricade homes with sandbags and to store goods that may be damaged due to flooding in safe pl; aces of the residence.

Furthermore, the NDMA advised the public to fasten any goods or items that may be swept away in the winds, for fear that such incidents could injure others and properties. Electrical appliances are also advised to be turned off when not used.

Maldives National Defense Force (MNDF) has also issued a warning to sea goers to remain alert for the current spell of bad weather. Earlier today, a boat carrying fuel capsized near Male’ City during the stormy weather while a few hours ago, a barge was left stranded on a reef after the anchor of the boat got swept away in the weather.

Maldives Meteorological Services (Met Office) has issued a yellow weather alert for most of the nation and anticipated heavy rains and thunderstorms. Some islands have even reported tidal waves.

Met Office said that the current spell of bad weather was due to weather formations in the region. During the last 42 hours, the highest rainfall was reported in the southern city of Addu which saw 611 millimeters of rainfall. Met office also said that the City had recorded winds of up to 55 miles per hour.

Met Office anticipated that the weather formations in the region were now moving west of the nation and that the rainfall could subside by tomorrow.

Weather expected to improve in Male’ area by Tuesday

Extreme weather for next 4 days in north, central areas