US Army pledges continued support to enhancing capacity of MNDF 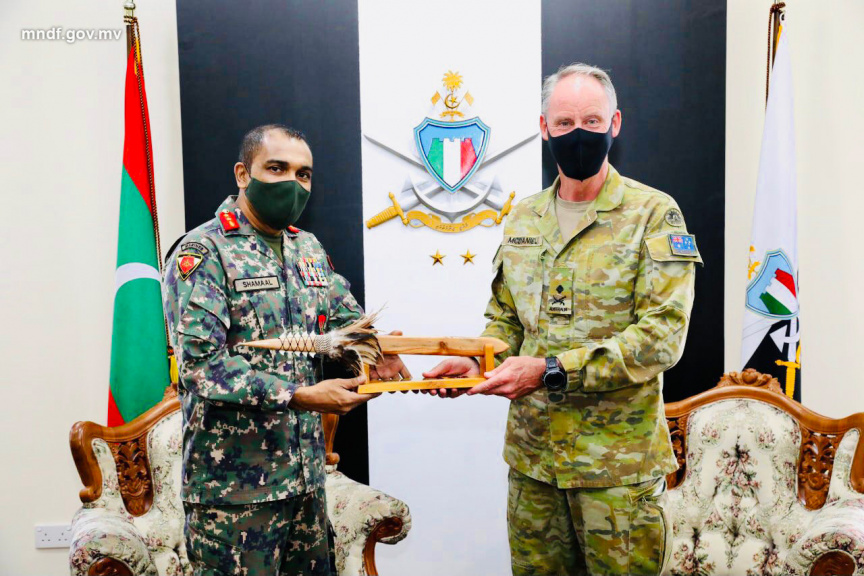 The pledge of support was made by Deputy Commander of the US Army Pacific, Major General Daniel F. McDaniel during a courtesy call on Chief of Defense Force of Maldives, Major General Abdulla Shamaal on Thursday.

During his call on Shamaal, McDaniel, who is in Maldives on an official visit, presented Shamaal with a memento hailing the new engagements and interactions between Maldives and US.

“In appreciation of your vision and leadership, the US Army stands alongside the Maldives National Defense Force,” reads the inscription on the memento.

US has been supporting the enhancement of the MNDF in areas such as special operations and maritime security through the provision of equipment and resources, under a defense framework agreement signed between Maldives and US by Maldivian Defense Minister Mariya Ahmed Didi and US Deputy Under Secretary of Defense Reed Werner in Philadelphia in September 2019.

MNDF said in a statement that MNDF’s relations with the US armed forces are the strongest they have ever been, and that interactions and engagements between the two forces have grown exponentially over the past few years.

US Army and MNDF have also started new training programs and initiatives for MNDF’s personnel have started, including new joint military exercises, such as the “Black Merlin” with the US Security Forces Assistance Brigade, which is currently underway.

MNDF states Deputy Commander of the US Army Pacific McDaniel has visited Maldives twice over the past 13 months, while other top military commanders including Brigadier General Rudd, Commander Special Operations Command have also visited.

MNDF said the US has also granted military hardware and equipment aid to MNDF, and has demonstrated intense support and provided aid during the COVID-19 pandemic.