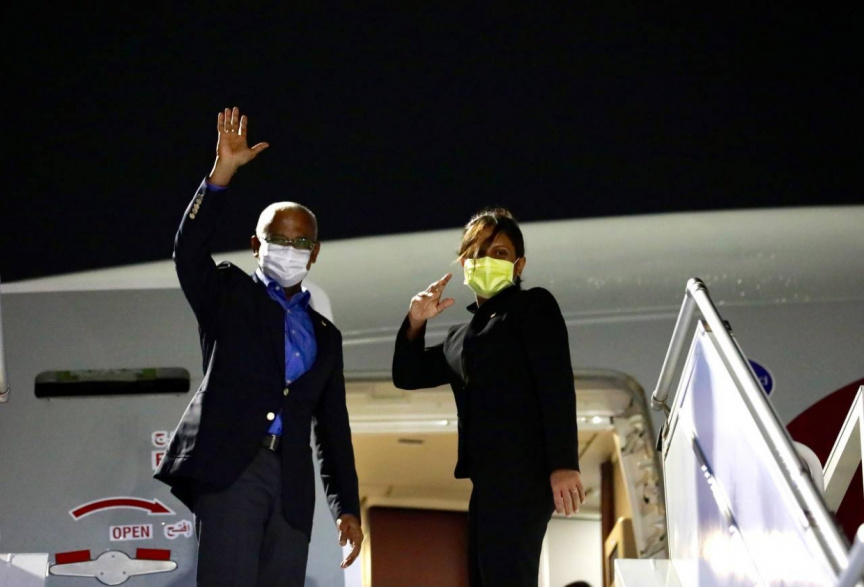 President Solih and First Lady Fazna depart on an official trip to Qatar and Bangladesh on March 14, 2021. (Photo/President's Office)

President Ibrahim Mohamed Solih has departed on an official visit to Qatar to reinstate diplomatic relations between the Maldives and the Middle-Eastern nation.

The President's Office also stated that the main objective of the visit to Qatar is to further develop bilateral bonds following the re-establishment of diplomatic relations between the two nations.

President Solih and the Maldivian delegation are scheduled to visit Bangladesh, on March 17, 2021.

In Bangladesh, President Solih will attend the official ceremony of the 'Birth Centenary of Bangabandhu Sheikh Mujibur Rahman'.

He will also hold a one-to-one call with the Prime Minister of Bangladesh and will meet with other senior officials of the Bangladeshi government to hold discussions on ways to further strengthen the bilateral relations between the Maldives and Bangladesh.

As part of the visit, the President will also meet the Maldivian community residing in Bangladesh.