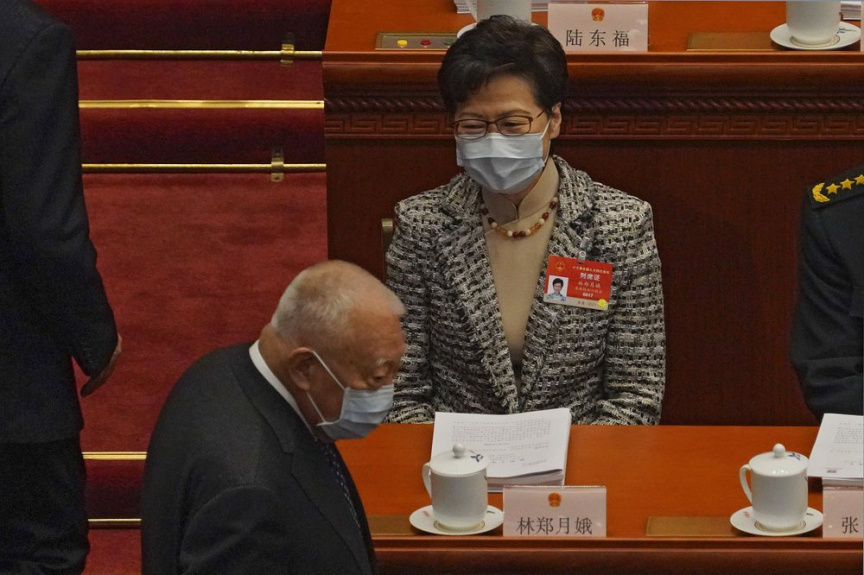 BEIJING (AP) — A largely pro-Beijing committee that elects Hong Kong’s leader will also choose a large part of the legislature, a top Chinese official announced Friday as part of a major revamp that will increase central government control over Hong Kong politics.

The changes are part of a draft decision submitted on the opening day of the weeklong meeting of the National People’s Congress, China’s ceremonial legislature, which will all but certainly endorse it.

The Election Committee will participate in the nomination of candidates for Hong Kong’s legislature and also elect “a relatively large share” of its members, said Wang Chen, vice chairman of the NPC Standing Committee.

He did not say how many legislators would be chosen by the committee. Hong Kong’s South China Morning Post newspaper, citing unidentified sources, said it would be 30 seats in an expanded 90-seat legislature.

That would be a significant rollback of democracy in Hong Kong, a semi-autonomous territory that has greater freedoms than mainland China but has seen them sharply cut back in the past year.

The Election Committee selected up to 10 members in earlier versions of the city’s legislature, but hasn’t done so since the 2000 election.

Wang added that the size, composition and selection of the 1,200-member Election Committee will also be adjusted, and the city’s leader will continue to be elected by the committee.

Currently, half of the city’s now 70-member Legislative Council is directly elected by voters. The other half is elected by professional or special interest groups from sectors such as insurance, engineering and agriculture.

With the largely pro-Beijing election committee nominating all candidates for the legislature, opposition figures could be barred from running in elections.

The draft changes came after the top Beijing official overseeing Hong Kong, Xia Baolong, declared that Hong Kong must be governed only by “patriots.”

In his speech, Wang said that “clear loopholes and shortcomings” in Hong Kong’s electoral system had allowed “anti-China” forces to undermine the overall stability in Hong Kong and jeopardize national sovereignty, security and development interests.

Ko Wing-man, a former Hong Kong health secretary who is in Beijing for an advisory body that meets in parallel with the congress, said the changes would marginalize radical forces in Hong Kong politics.

He acknowledged the right of people to ask for more liberty and political autonomy, but said the pro-democracy movement has been driven overboard by radicals seeking self-determination and independence.

“The whole thing becomes unconstitutional,” he said in an interview with the AP. “I think you would believe that in any country. Unconstitutional behaviors are serious matters.”

Pro-democracy supporters say Beijing’s increasing control over the city’s political system violates its pledge to give Hong Kong 50 years of autonomy under a “one country, two systems” framework when the city was handed over to China by the British in 1997.

“China’s Communist parliament has taken the biggest step so far to obliterate Hong Kong’s freedoms and aspirations for greater democracy under the rule of law,” he said in a statement. “The Chinese Communist Party has shown the world once again that it cannot be trusted. It is a continuing and brutal danger to all who believe in free and open societies.”

Months of anti-government protests erupted in 2019, at times descending into violence between police and protesters. This eventually led Beijing to impose a national security law on Hong Kong.

The legislation criminalizes secession, subversion, collusion with foreign forces to intervene in the city’s affairs and terrorism, and has since been used to charge about 100 people in the city, including 47 pro-democracy activists last week.

The activists were charged with conspiracy to commit subversion over their involvement in an unofficial primary election last year, aimed at selecting candidates that could give the pro-democracy camp a legislative majority.

If the pro-democracy camp had won a majority, at least some members of the camp had plans to vote down major bills, which would eventually force Hong Kong leader Carrie Lam to resign. Authorities said the activists’ participation in the primary was part of a plan to paralyze the city’s legislature and subvert state power.