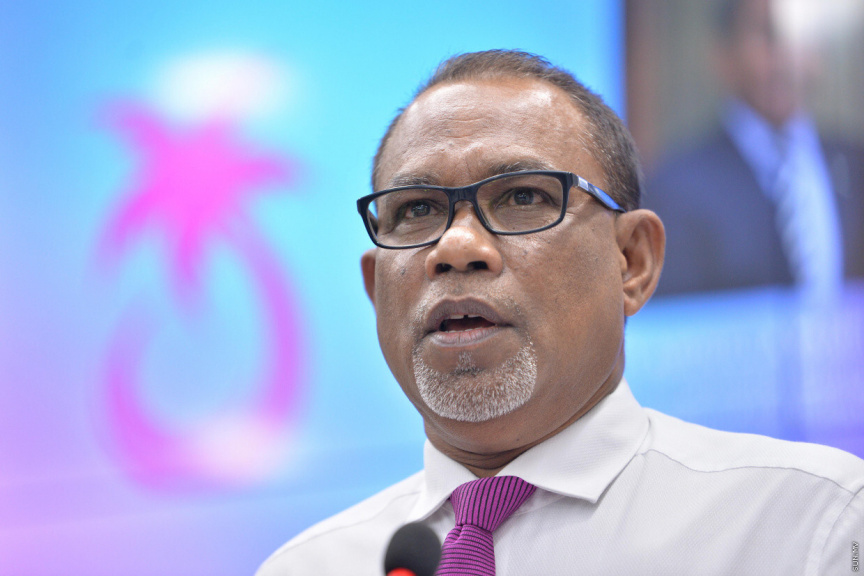 People’s National Congress (PNC) leader and former Fonadhoo MP Abdul Raheem Abdulla (Adhurey) has entered a plea of “not guilty” to the charge against him for using profane language in public.

Abdul Raheem is being prosecuted for using an obscene word as he expressed his displeasure at Criminal Court judges using a loudspeaker during a demonstration outside the court on November 28, 2019, the day former Maldivian President Abdulla Yameen Abdul Gayoom was convicted for money laundering.

Abdul Raheem was charged with using abusive or obscene language under Section 615 (Disorderly Conduct) (b) and (c) with reference to Section 615 (a) (3) over the incident nearly a year later on October 26, 2020.

Before responding to the charge during a Criminal Court hearing on Thursday morning, Abdul Raheem’s attorney and son-in-law Ahmed Hisham Wajeeh said that in his commentary, American Professor Paul Robinson, who assisted in drafting of the Penal Code, wrote that issues such as use of obscene language is linked with public interest, and complaints over such issues must be lodged by private citizens. He said that the complaint against Abdul Raheem, however, was lodged by Department of Judicial Administration (DJA).

The public prosecutor said that interpretation of the law as suggested by the defense will render law enforcement agencies powerless.

Abdul Raheem’s lawyer argued that the Interpretations Act establishes that research into laws may be used in interpreting laws. He said that such academic research is useless if it cannot be used.

The public prosecutor said that the State is not opposed to accepting the research, but that acting upon the research is not compulsory, and that the law should instead look at the parliamentary debates when establishing the law and the intended application of the law.

After asking questions of the State, Abdul Raheem entered a plea of “not guilty” to the charge.

The State said they do not wish to file any pretrial motions, but would like the opportunity to file motions later to counter evidence the defense may present.

The defense said they wish to file some pretrial motions, and asked for the opportunity to make the submissions in writing.

Judge Hassan Saeed granted the defense until 13:00 on Tuesday, March 9, to make the submissions.

Use of abusive or obscene language is a Class 3 misdemeanor. The minimum sentencing requirement for the offense is a one month and six days in prison. The defendant will be served a reduced 27-day sentence if he/she confesses.