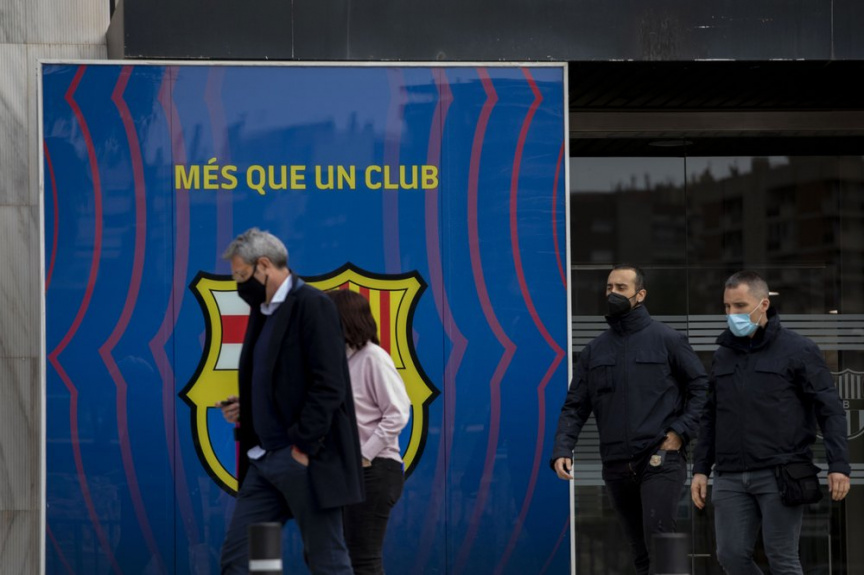 MADRID (AP) — Catalan police arrested four people — including former president Josep Maria Bartomeu — after raiding Barcelona’s stadium on Monday in a search and seizure operation, adding to the club’s turmoil less than a week before it holds presidential elections.

The operation was related to last year’s “Barçagate,” in which club officials were accused of launching a smear campaign against current and former players who were critical of the club and then-president Bartomeu.

Police did not say who were taken into custody but presidential candidate Joan Laporta confirmed Spanish media reports that Bartomeu was among those detained.

“Facing what happened today with the raids at the club’s headquarters and the detentions of Barça’s ex-president Josep Maria Bartomeu and other executives of the club, our team want to express our utmost respect towards the actions conducted by the judiciary and police authorities as well as utmost respect towards the principle of presumption of innocence,” Laporta said. “We are deeply saddened by these events that cause enormous harm to the image of our club.”

Members of the police’s financial crimes department conducted the operation in five different locations, including “some specific departments of the FC Barcelona offices.” They said they were investigating “alleged crimes related to property and socio-economic order.”

Among those the Spanish media claimed were detained were club CEO Óscar Grau and legal department chief Román Gómez Ponti. Jaume Masferrer, Bartomeu’s former chief of staff, also was allegedly detained. They were taken to a police station for interrogation, Spanish media said, and police also went to Bartomeu’s house searching for evidence.

“We want to highlight the attitude and collaboration of the FC Barcelona in the records that have been made today and during the course of the investigation,” the police said in a statement. “The investigation, which has been going on for almost a year, is still ongoing.”

The club, mired in debt of more than 1.1 billion euros ($1.3 billion), said it offered “full collaboration to the legal and police authorities to help make clear facts which are subject to investigation.” It added the case was related “to the contacting of monitoring services on social networks.”

“The information and documentation requested by the judicial police force relate strictly to the facts relative to this case. FC Barcelona (expresses) its utmost respect for the judicial process in place and for the principle of presumed innocence for the people affected within the remit of this investigation.”

The club did not mention Bartomeu. A text message sent to Bartomeu was not immediately answered.

Laporta, one of the three presidential candidates in elections on Sunday, told Lleida Radio that what happened on Monday “was a consequence of the bad management by the previous administration.” He said the news of Bartomeu’s detention was “shocking” and “not good” for the club, but stressed that the former president deserved the “presumption of innocence.”

Laporta was Barcelona’s president a decade ago and, like Bartomeu, also faced a no-confidence vote during his time in charge.

Barcelona had denied accusations that it hired — and overpaid — a company to make negative comments about its own players and opponents on social media in order to boost the image of senior club officials.

The company was accused of using fake social media accounts to discredit opposition figures when they expressed views that went against the club. Some of the figures supposedly included players such Lionel Messi and Gerard Piqué, as well as former coach Pep Guardiola.

The club later released an independent audit report showing that there was no wrongdoing.

Bartomeu and his board of directors resigned last year amid fallout from the controversy surrounding Messi. The club has been mired in political turmoil and debt prompted by the coronavirus pandemic.

The club has been managed by a caretaker board since Bartomeu left in October while facing a no-confidence motion supported by thousands of club members furious at the team’s poor performances and the club’s financial situation.

The club’s struggles began to surface after the team’s embarrassing 8-2 loss to Bayern Munich in the quarterfinals of the Champions League last season, which was the first without a title for the Spanish club since 2007-08.

Bartomeu was loudly criticized by Messi, especially after the former president denied the player’s request to leave the club at the end of last season. Messi’s contract ends this season and the Argentine great has yet to say whether he will stay or go.