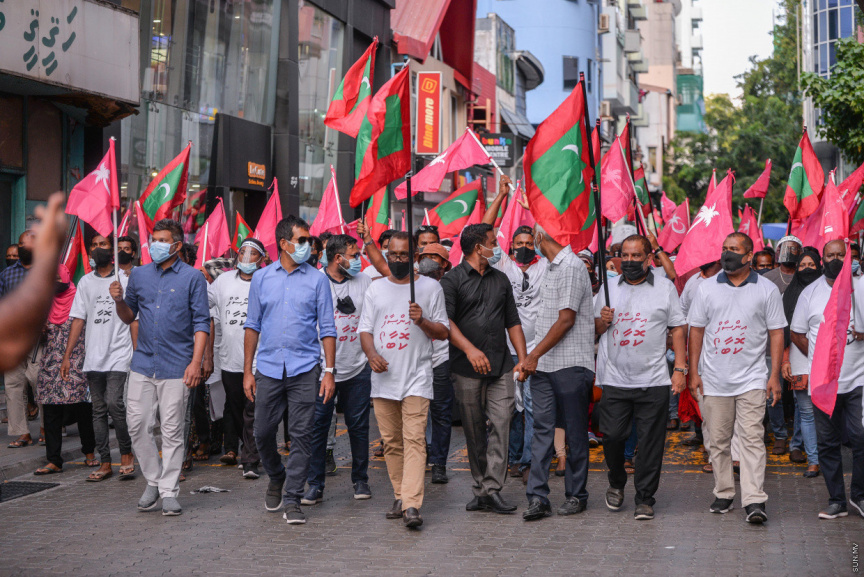 A protest by the opposition coalition. (Sun Photo/Fayaz Moosa)

Maldivian opposition political parties have called on the public to vaccinate, after the World Health Organization (WHO) approved the use of the Covishield vaccine.

The Progressive Coalition of parties has previously voiced dissent against the use of the vaccine before being approved by the WHO.

The vaccine developed by the University of Oxford and Astrazeneca, and manufactured in India, had been administered in the Maldives since February 1, after Maldivian authorities deemed the vaccine safe for use. The WHO had approved the emergency use of the vaccine last Monday.

A statement by the opposition issued today read that the coalition supported the administration of the vaccine after the Covishield vaccine was approved for emergency use by the WHO.

The statement also read that senior members of the opposition parties would also get vaccinated in the coming days and added that it would keep heeding the advice of the WHO in the future as well. The coalition also called on Maldivian authorities to do the same.

The Maldives has received more types of vaccines since the first batch of Covishield donated by India, including the Chinese-made Sinopharm. The coalition called on the authorities to ensure that the vaccines were approved by the WHO before being administered.

The opposition said that it remained steadfast on the view that the public should not be inoculated unless the vaccines were approved for use by the WHO.

The opposition has previously held protests against vaccination.