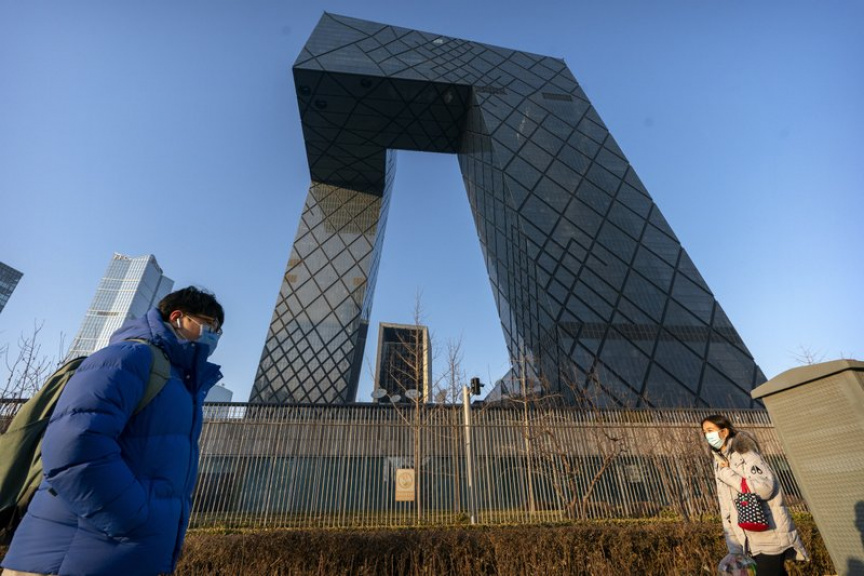 FILE- In this Thursday, Feb. 4, 2021 file photo, people wearing face masks to protect against the spread of the coronavirus, walk past the CCTV Headquarters building, the home of Chinese state-run television network CCTV and its overseas arm CGTN, in Beijing. The U.K. has stripped China's state-owned TV channel of its broadcasting license in the country, after an investigation found the license holder lacked editorial control and had links to China's ruling Communist Party. (AP Photo/Mark Schiefelbein, File)

The move late Thursday was largely symbolic, because BBC World already was limited to being shown on cable TV systems in hotels and apartment compounds for foreigners and some other businesses.

The Chinese government has criticized BBC reports about the COVID-19 pandemic in China and about allegations of forced labor and sexual abuse in the Xinjiang region, home to the Uighurs and other predominantly Muslim ethnic groups.

“The channel fails to meet the requirements to broadcast in China as an overseas channel,” the Radio and Television Administration said in a statement dated midnight Friday.

It gave no indication whether BBC reporters in China would be affected.

The communist Beijing government last year expelled foreign reporters for The Washington Post, The Wall Street Journal and The New York Times during disputes with the Trump administration.

British Foreign Secretary Dominic Raab, in a written statement, called the move “an unacceptable curtailing of media freedom” that would “only damage China’s reputation in the eyes of the world.”

A Chinese Foreign Ministry spokesperson said Ofcom had acted on “political grounds based on ideological bias.”

Losing its British broadcasting license was a setback for CGTN, which is part of efforts by the ruling Communist Party to promote its views abroad abroad. CGTN has a European operations hub in West London.

Price called on the Chinese government to allow its population free access to the media and the internet.

Alibaba fined $2.8B on competition charge in China