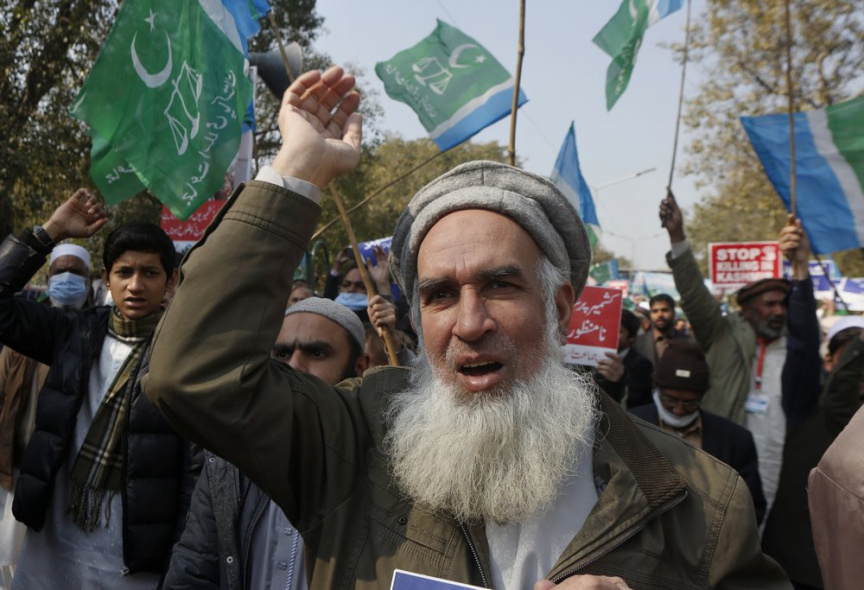 ISLAMABAD (AP) — Pakistan will allow people in the Pakistan-administered section of divided Kashmir to decide whether they wanted to join Pakistan or prefer to remain independent in a future referendum on the disputed Himalayan region, the prime minister said Friday.

Imran Khan spoke at a rally in the town of Kotli in the Pakistan-administered Kashmir as the country marked the annual Day of Solidarity with Kashmir.

“God willing, Pakistan will give the right to Kashmiri people to decide whether they want to remain independent or become part of Pakistan,” Khan said.

Khan expressed readiness to talk to his Indian counterpart, Narendra Modi, if he reverses steps taken by New Delhi in 2019 by changing the special status of Kashmir, which is split between Pakistan and India and claimed by both in its entirety.

At the time, relation between Pakistan and India were strained over New Delhi’s move to divide the Indian-administered part of the Muslim-majority Kashmir into two federally governed territories — Jammu and Kashmir, and Ladakh — touching off anger on both sides of the frontier.

Khan assailed India’s Hindu nationalist government over the action, calling India a state sponsor of hatred and prejudice against Islam. Since then, Pakistan has refused to hold talks with India, saying Modi must first restore the original status of the Indian-administered Kashmir.

Earlier, Shibli Faraz, Pakistan’s information minister, told The Associated Press that Islamabad would resume talks with India when Modi’s government agrees to a Kashmir referendum in accordance with U.N. resolutions.

In southwestern Pakistan, at least 16 people were wounded when an unknown assailant threw a hand grenade at people standing along a road minutes after a pro-Kashmir rally passed through the area, local police chief Wazir Ali Marri said. No one claimed responsibility for the attack, which took place in the district of Sibi in Baluchistan province. The restive province has been the scene of a low-level insurgency by separatists demanding a greater share of local natural gas and mineral resources.

Also in Baluchistan, later Friday, a bomb went off near a government office in the city of Quetta, the provincial capital, killing at least two people and wounding five, police said. No one immediately claimed responsibility for the bombing, which took place near the office of the deputy commissioner.

In Kashmir, Pakistan has long pushed for the right to self-determination under a U.N. resolution passed in 1948, which called for a referendum on whether Kashmiris wanted to merge with Pakistan or India.

The future of Muslim-majority Kashmir was left unresolved at the end of British colonial rule in 1947, when the Indian subcontinent was divided into predominantly Hindu India and mainly Muslim Pakistan.

India and Pakistan have fought two of their three wars over Kashmir since gaining independence from British rule in 1947. In 2019, a car bombing in Indian-controlled Kashmir killed 40 Indian soldiers and brought the nuclear-armed rivals to the brink of war.

India has an estimated 700,000 soldiers in its part of Kashmir, fighting nearly a dozen rebel groups since 1989. In many areas, the region has the feel of an occupied country, with soldiers in full combat gear patrolling streets and frisking civilians. More than 68,000 people, most of them civilians, have been killed in the conflict.

Also Friday, the Pakistani military took foreign media on a tour of a border village in Pakistan-administered Kashmir to demonstrate damage by Indian fire. Residents in the area accuse India of deliberately targeting civilians, a charge India denies.

The two sides regularly trade fire in violation of the 2003 cease-fire agreement across the Line of Control, which separates the two sectors of Kashmir. Civilians are often caught in the crossfire, with dozens killed every year in the violence.

Most of the people who live along the boundary line have either lost family members or relatives in recent decades.