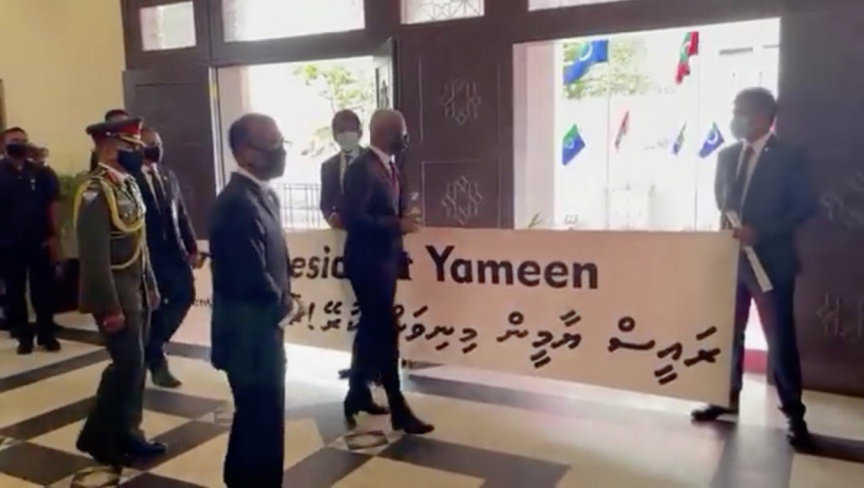 Parliamentarians from the opposition Progressive Congress Coalition boycotted President Ibrahim Mohamed Solih’s annual address on Thursday, as the Parliament reopened for the year.

Opposition parliamentarians refused to enter the chamber to listen to the President’s address, instead choosing to stage a demonstration outside the chamber, as supporters gathered outside the Parliament building to protest against the government.

“We boycotted it because we do not believe the principles of democracy are being upheld whilst the opposition leader is being unfairly abused,” he said.

Some of the opposition parliamentarians attempted to enter the chamber holding a banner which called for Yameen to be freed, but were barred by security.

“The soldiers said we cannot enter holding banners. So we were there [outside the chamber] holding the banner. That’s the message we want to relay,” said Saeed.

President Solih was seen stopping and speaking to the opposition parliamentarians holding the banner after he exited the chamber after delivering his address.

Saeed said he told the President he believes Yameen’s continued incarceration and denial of rights to be a grievous injustice. And asked that he cease the abuses against Yameen and grant his immediate release.

Saeed alleged that the government wishes to ensure victory in the upcoming local council elections by keeping Yameen behind bars, the same as they won the parliamentary elections.

Parliament library opens with over 2,000 books