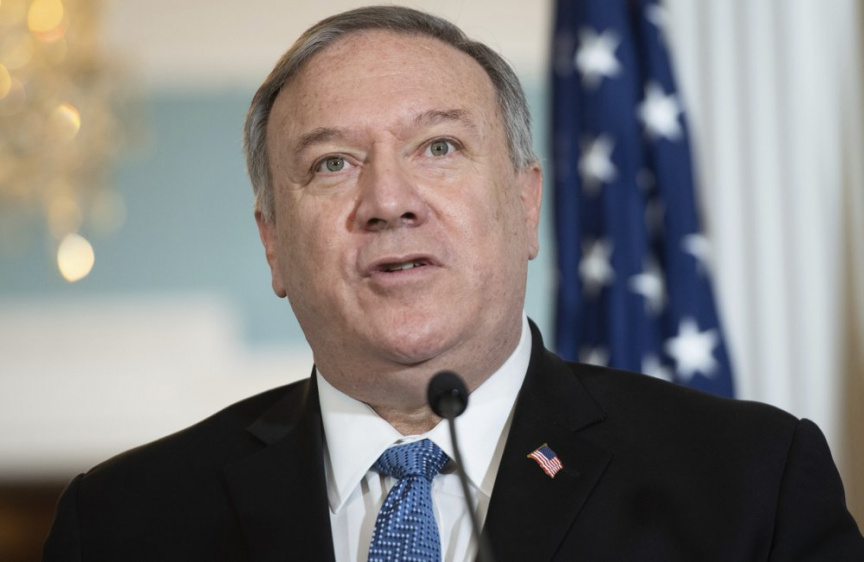 In this Nov. 24, 2020, file photo, Secretary of State Mike Pompeo speaks to the media prior to meeting with Kuwaiti Foreign Minister Sheikh Ahmad Nasser Al-Mohammad Al-Sabah at the State Department in Washington. (Saul Loeb/Pool Photo via AP, File)

WASHINGTON (AP) — As time runs down on the Trump administration, Secretary of State Mike Pompeo and top aides are rushing to complete actions they believe will cement the legacy of the president and themselves, according to U.S. officials.

In the coming days, Pompeo is poised to announce new measures against Yemen’s Iran-backed Houthi rebels and likely re-designate Cuba as a “state sponsor of terrorism,” according to three officials. Both moves will impose or re-impose sanctions on the targets and may complicate the incoming Biden administration’s diplomacy and could be announced as early as later Sunday or Monday, the officials said.

The officials were not authorized to discuss the steps publicly because they have not yet been announced and spoke on condition of anonymity.

The expected announcements will follow a surprise step that Pompeo took on Saturday when he declared restrictions on U.S. diplomatic contacts with Taiwanese officials to be null and void, angering China which regards the island as a renegade province. In addition, Pompeo plans before leaving office on Jan. 20 to draw explicit links between Iran and al-Qaida and hit more Iranian entities with sanctions.

The administration has been weighing the formal designation of the Houthi rebels as a “foreign terrorist organization” for months. But that effort had been bogged down in internal disagreements over whether sanctions could be effectively enforced without worsening the dire humanitarian crisis in Yemen.

Objections from the Treasury Department were apparently overcome last week after certain exemptions to the sanctions allowing for aid work to continue were arranged. The extent of those exemptions was not immediately clear on Sunday.

Consideration of the designation has already prompted complaints from relief organizations that have warned the sanctions could prove catastrophic for efforts to help starving Yemeni civilians who have been caught in the conflict between the Houthis and the Yemeni government, which is backed by Saudi Arabia. The Saudi role in the Yemeni war has been hotly debated by U.S. lawmakers who have tried unsuccessfully to block the sales of advanced weapons that could be used in the fighting.

President Donald Trump has taken a tough line on Cuba and rolled back many of the sanctions that the Obama administration had eased or lifted as part of a broader rapprochement with the communist island. Removing Cuba from the “state sponsors of terrorism” list had been a key component of that effort and re-listing the country has been a long-term goal of Pompeo’s.

Such a designation is a legal one and it was not immediately clear on Sunday if all the technical criteria needed to restore Cuba to the list had been met, according to the officials. In removing Cuba from the list, the Obama administration had determined that the country no longer supported international terrorism, but Pompeo is expected to cite Cuban support for Venezuelan leader Nicolas Maduro as a major justification for the move, the officials said.

Pompeo is also expected to deliver remarks later this week denouncing Iran for its alleged harboring and support for members of Osama bin Laden’s al-Qaida network. In November, U.S, officials said Iran had been harboring al-Qaida’s No. 2, Abu Muhammad al-Masri, who had been killed in August by Israeli agents in Iran along with his daughter, the widow of bin Laden’s son Hamza bin Laden.

The Trump administration has steadily ratcheted up pressure on Iran since the president withdrew from the 2015 nuclear deal in 2018 and began to re-impose sanctions that had been eased under the agreement, which aimed to curb Iran’s atomic program.

On Saturday, Pompeo announced that he was rescinding all restrictions on contacts between U.S. diplomats and Taiwanese officials. Those restrictions had been in place since the U.S. formally adopted its “one China” policy in 1979 and recognized Beijing after dropping formal diplomatic ties with Taipei.

Pompeo has been at the forefront of the administration’s push to go after China for its actions in Taiwan, crackdowns on dissent and human rights in Tibet, Hong Kong and the western Xinjiang region, as well as Beijing’s disputed maritime claims in the South China Sea.

US to reopen land borders in Nov. for fully vaccinated

US man executed for killing 3 workers in ’94 robbery