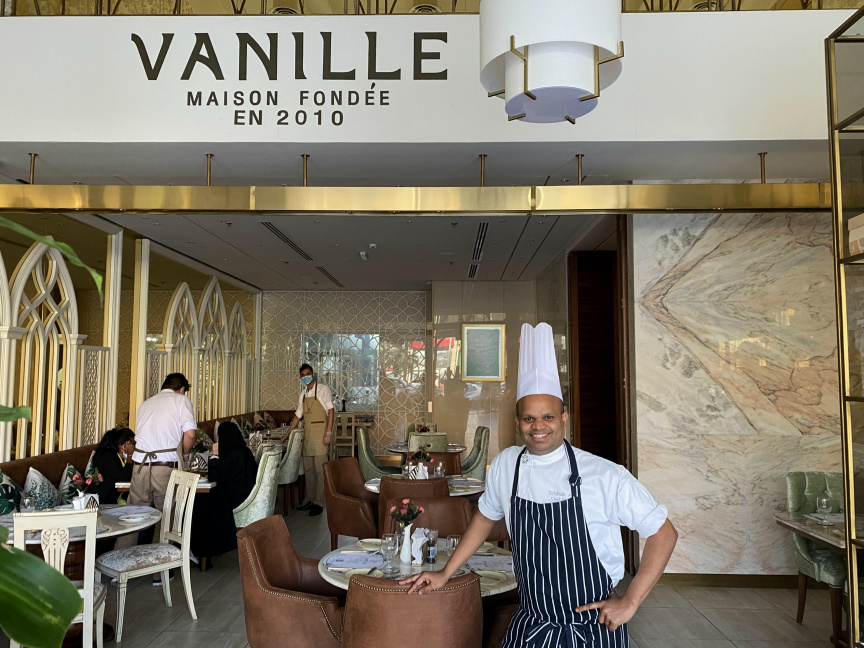 Adam Schihab remembers his first stint in the industry when his uncle introduced him to a friend to work in his café in Male’, called the Harbour Café. At first, he served food from behind the counter, and later met with the manager of an Italian club resort, where he worked in the kitchen washing pots.

Schihab still remembers his time when he assisted the Italian chef at the resort, who first taught him to hold a chef’s knife properly and how to cut up vegetables, mix sauce, and cook pasta.

“I used to work 17 hours a day, and in my spare time, I used to help our Italian pastry chef. He liked me a lot and requested our executive chef to transfer me to pastry, where he let me wear my first chef’s uniform. That’s how I ended up working in pastry.” said Schihab.

Today, he is, if not the most, one of the most important and famous names in the culinary industry of Maldives, but remains extremely embedded down to earth, despite his successes.

Speaking about his first years in the industry, Schihab said that he never had any childhood thoughts of becoming a chef. For him, it was an instant decision after learning how fresh ice cream was made. Over the years, it has now become his passion which he has turned into his career.

He fondly remembers his time training for the industry and work. He recalls so many interesting and memorable things that happened during training.

Especially the time when he was training with Chef Stéphane Tréand who was the winner of Meilleur Ouvrier de France in patisserie when Schihab and his partner were making a chocolate display.

“It took three hours, but before we completed it, it collapsed. Watching other students’ displays and having our own fail was a total disaster for me.” Said Schihab reminiscing over those days.

Schihab is currently the Head of Operations and Chef Partner at Vanilla Group Co, which is in partnership with GAS Arabian Services Group.

The company and its partners own and operate a pastry shop and a catering kitchen that serves over 45 coffee shops, hotels, and restaurants and in his role as Head of Operations, Schihab oversees and manages all the operations of the business.

Schihab is also one of the few Maldivian chefs to find success in the form of writing. His book, The Islander Chef was a successful publication at one of the 23 best online bookstores, and although sales are currently on hold due to technical issues, Schihab expects the book to be republished in the middle of next year.

The Islander Chef will also include the greatest recipes for decadent chocolate cake and polish as well as Macarons, which are one of the highlighted recipes most requested on Instagram by Schihab's followers.

Very much eager determined to stick to his roots, Schihab visits his home nation of Maldives almost every year. Currently based in Saudi Arabia, Schihab very much misses the authentic Maldivian foods such as sweet potatoes, yams, corn, pumpkins, cassavas best available from his home island of Vaadhoo.

“The food my grandfather ate was all chemical-free. Nowadays, Maldivian food is seasoned with too many Indian spices.” Said Schihab.

He takes pride in the fact that his recommendations have seen several chefs land their dream jobs. I can connect you to well-known chefs and suppliers.

“I always want to find a way to connect chefs from around the world in my professional field. Regarding the professional chef Instagram network, I am connecting chefs that I had never met before,”

“Some of them we met in Dubai during Expo and other events. I have chefs that DM me every day with many different questions.” Said Schihab.

Looking at the future, Schihab sees the advancement of technology, replacing chefs by a giant industrial machine, and the role of technology playing a bigger and bigger role in the industry every day.

“All the restaurants would place their orders through online apps and delivery would be by a third party,”

“Customers are kings nowadays. If the customer is not happy with the meal, he can write a very bad review on social media, and then the business’s rating will immediately drop. Customers have much control of how you should run your business.” Said Shihab.

However, from his years of gaining experience, Shihab’s words to young hoteliers are to learn and keep gaining an education online and drop their own ego.

“Young Maldivians are being led astray by politicians and Islamophobia. They should focus on their future instead of being distracted by “entertainment” that is not going to pay their bills. I suggest that you keep yourself and your family busy with activities that bring value to your life, such as financial education.”

Learn your weak points and work on improving them. Be positive and speak positive, using positive words. Listen to motivational podcasts and watch motivational videos.

He also takes his advice with his time spent on reading and always works to keep improving and keep pushing himself to become a better person every day!

“Do not do your job for the sake of the money; do it because you love doing it. The money will follow later,” said Schihab.

In Conversation with Richard Quest