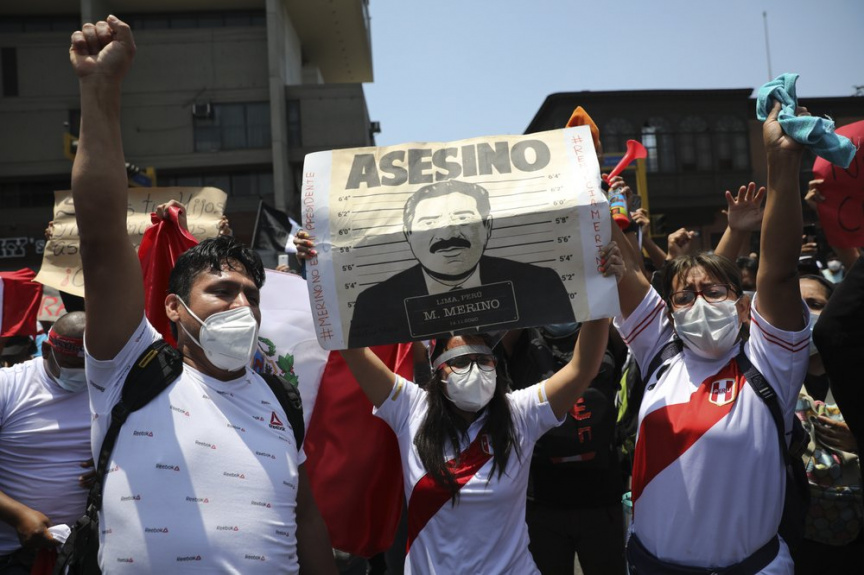 In a short televised address, Manuel Merino said Congress acted within the law when he was sworn into office as chief of state Tuesday, despite protesters’ allegations that legislators had staged a parliamentary coup.

“I, like everyone, want what’s best for our country,” he said.

The politician agreed to step down after a night of unrest in which two young protesters were killed and half his Cabinet resigned. Peruvians cheered the decision, waving their nation’s red and white flag on the streets of Lima and chanting “We did it!” But there is still no clear playbook for what comes next.

Congress scheduled an emergency session for Sunday evening to select a new president. Meanwhile, ex-President Martín Vizcarra – whose ouster sparked the upheaval – called on the country’s highest court to step in.

“It can’t be that the institution that got us into this political crisis, that has for five days paralyzed Peru, with deaths, is going to give us a solution, choosing the person who they best see fit,” Vizcarra said.

Peru has much at stake: The country is in the throes of one of the world’s most lethal coronavirus outbreaks and political analysts say the constitutional crisis has cast the country’s democracy into jeopardy.

“I think this is the most serious democratic and human rights crisis we have seen since Fujimori,” said analyst Alonso Gurmendi Dunkelberg, referring to the turbulent rule of strongman Alberto Fujimori from 1990 to 2000.

Congress kicked Vizcarra out using a clause dating back to the 19th century that allows the powerful legislature to remove a president for “permanent moral incapacity.” Legislators accused Vizcarra of taking more than $630,000 in bribes in exchange for two construction contracts while governor of a small province years ago.

Prosecutors are investigating the allegations but Vizcarra has not been charged. He has vehemently denied the accusations.

Merino, previously head of Congress, stepped in as interim president, but his six-day rule was marred by constant protests. The little-known politician and rice farmer promised to keep in place a scheduled vote for a new president in April. That did little to sway Peruvians who were loath to accept him.

Half of those in Congress are themselves under investigation for alleged crimes including money laundering and homicide. Polls show most wanted Vizcarra to carry out the rest of his presidential term, due to expire in July. As Peruvians took to the streets, police responded with batons, rubber bullets and tear gas.

A network of human rights groups reported that 112 people were hurt in Saturday’s protests and the whereabouts of 41 others were unknown. Health authorities said the dead included Jack Pintado, 22, who was shot 11 times, including in the head, and Jordan Sotelo, 24, who was hit four times in the thorax near his heart.

“Two young people were absurdly, stupidly, unjustly sacrificed by the police,” Peruvian writer and Nobel laureate Mario Vargas Llosa said in a recorded video shared on Twitter. “This repression – which is against all of Peru – needs to stop.”

The protests rocking Peru are unlike any seen in recent years, fueled largely by young people typically apathetic to the country’s notoriously erratic politics. Protesters are upset at Congress for staging what they consider an illegal power grab.

In remarks before Saturday’s upheaval, Merino denied the protests were against him, telling a local radio station that young people were demonstrating against unemployment and not being able to complete their studies because of the pandemic. For many, that showed just how out of touch Congress is.

“We want the voice of the people to be heard,” protester Fernando Ramirez said as he banged a spoon against a pot at a protest.

The protests sent a resounding message to political elites that Peruvians will serve as a check on Congress if they try to illegitimately grab power, said Steven Levitsky, a Harvard University political scientist who has extensively studied Peru.

“This is a very good day for Peruvian democracy,” he said.

According to the National Association of Journalists, there were 35 attacks against members of the media between Monday and Thursday, almost all by police officers. Rights groups have also documented excessive force against protesters, the use of tear gas near homes and hospitals and the detention of demonstrators.

If Congress proceeds with selecting a new leader, they may have relatively few options that would appease demonstrators. An overwhelming majority – 105 of 130 – voted in favor of removing Vizcarra. They are widely expected to choose among those who were against the ex-president’s surprise rushed removal.

“You look for someone who is clean — not corrupt, not tainted, not behaving in some sort of ridiculous self interest way — you don’t have a lot of options,” Levitsky said.

There is also still a possibility that Congress could find a way to usher in Vizcarra’s return.

The timing of the crisis could not be worse: Peru has the world’s highest per-capita COVID-19 mortality rate and has seen one of Latin America’s worst economic contractions. The International Monetary Fund projects a 14% decline in GDP this year.

In stepping down, Merino said he’d fulfilled his responsibility with “humility and honor” and that it was a challenge he “accepted and did not seek.” He accused unnamed actors of trying to “confuse the country” into thinking Congress wanted to kick out Vizcarra in order to delay the upcoming presidential vote.

Merino’s resignation is likely to quell protests, at least temporarily, but much still hangs in the balance with the future of the presidency uncertain, said Cynthia McClintock, a political science professor at George Washington University.

“The longer he was in office, the more reactionary and old-school his administration appeared likely to be,” she said. “A lot will depend, though, on the successor.”

Steady rain set off mudslides in Peru, kill at least 36