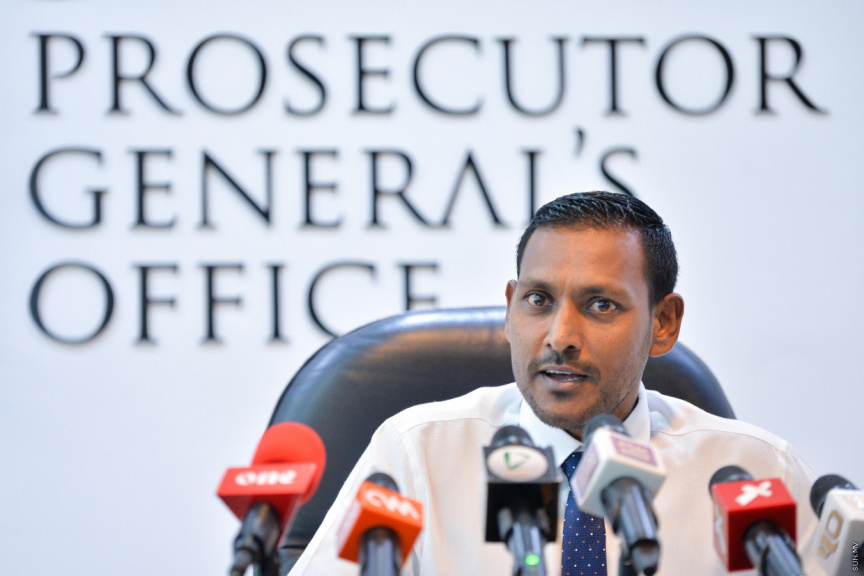 Prosecutor General Hussain Shameem said on Saturday that he does not recall being the president of Maldivian Democracy Network (MDN) when it released an inflammatory report containing derogatory descriptions of the religion of Islam and Prophet Mohamed, and that he had not been actively involved in the work on the report.

MDN’s executive director, Shahinda Ismail has recently stated that that Shameem, her former spouse, had been the president of MDN when it released the report in question, a preliminary assessment of radicalization in Maldives.

Shameem, who appeared on the national radio station Dhivehi Raajjeyge Adu’s show Ahaashey Bunaanan on Saturday evening, was asked about Shahinda’s remark by one listener.

Shameem responded that he had been overseas, and doesn’t recall being MDN’s president at the time.

“I was overseas so I wasn’t actively involved in anything; in publishing the report or reviewing and commenting on the report or approving for the report to be published.”

Shameem said that MDN’s board does not grant approval for reports, but merely sets policies, while the executive director runs the NGO.

He said that all NGO’s operate in the same manner.

“Board meetings are held twice or thrice a year… I don’t recall if the report was released while I was president. I can’t say for certain. Even if it was, I was not actively involved in that,” he said.

The radio show host asked when Shameem became aware of the release of the report.

Shameem responded that he had been aware MDN was working on the report, and that the NGO has released three reports. He said that he hadn’t been MDN’s president when the report investigated by the authorities was released.

“If the information I have isn’t incorrect, the report the government investigated is the one later released by the NGO. I wasn’t serving in any position at the NGO or otherwise involved in the report which was later released,” he said.

One listener asked Shameem the specific duration he served as MDN’s president, to which he responded that he “doesn’t remember”.

“I remember being MDN’s president for a short period of time. I don’t remember the details. I worked with a lot of NGOs,” he said.

Shameem said that he had served in various positions in a number of NGOs, but was never actively involved in the work of the NGOs in question.

He said that he ceased all active involvement in NGOs in 2014.

Shameem said that he had generally served NGOs on a voluntarily basis, proving his professional expertise and assistance in training.

When asked if his office will prosecute MDN, Shameem said that he will take necessary action once the police conclude their investigation and forward the case to his office.

MDN’s report, released in 2016, was based on a research into how radical ideologies are propagated, and the extent to which it has spread in Maldives. The use of derogatory descriptions of the religion of Islam and Prophet Mohamed in the report sparked mass public outrage and calls for MDN to be banned.

The police, following its investigation, concluded that the report was blasphemous, and the Youth Ministry cancelled MDN’s registration.