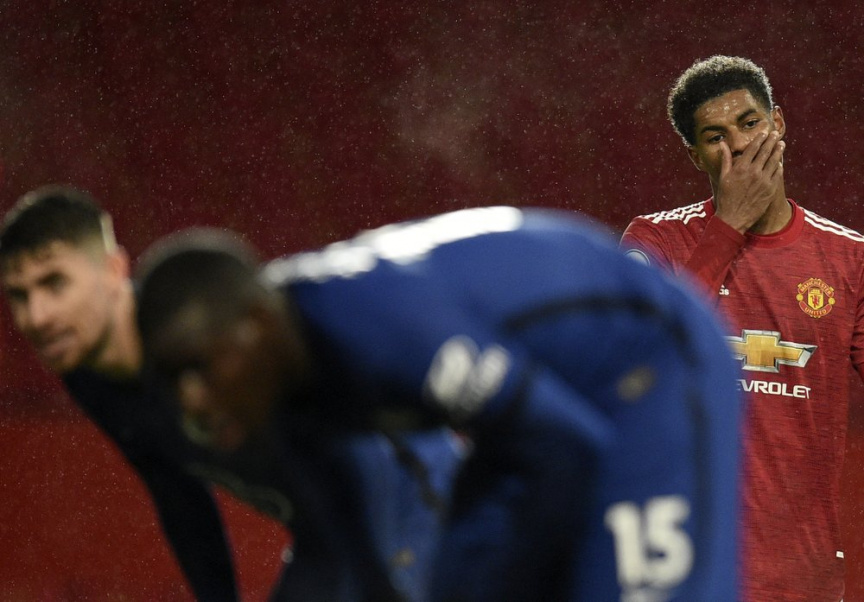 LONDON (AP) — The Manchester rivals are rolling the clock back six years in a way neither desires.

A pair of draws on Saturday left the teams with their lowest English Premier League points tallies after five games since 2014 — leaving both languishing in the bottom half of the standings.

City is on eight points after being held at West Ham to 1-1.

United is a point worse off after a goalless encounter with Chelsea.

While City at least has the comfort of winning the title since it last started as badly — in 2018 and 2019 — United’s heavy spending hasn’t got them much closer to lifting the trophy since Alex Ferguson’s retirement in 2013.

Even Liverpool has managed to end its 30-year championship drought, and the title defense is back on the winning path. After being humiliated 7-2 by Aston Villa and drawing with Everton, the champion came from behind to beat Sheffield United 2-1 to go second behind Merseyside rival Everton.

The Blades remain stuck on a single point along with Fulham, which lost to Crystal Palace 2-1.

After scoring 22 goals and conceding only once across five previous visits to West Ham, City found this trip to east London far harder going.

Fresh from grabbing a draw at Tottenham on Sunday, West Ham took the lead through Michail Antonio’s overhead kick in the 18th minute.

The point was rescued only by substitute Phil Foden’s second-half strike, after bringing down João Cancelo’s cross on the turn. But Foden going on for Sergio Aguero is a concern for City, with the striker facing a spell out with a hamstring injury.

City manager Pep Guardiola is blaming coronavirus cases and the congested, pandemic-impacted season for City’s sluggish start to the campaign.

“We need time and we don’t have enough regeneration for the players,” Guardiola said. “I’m just saying what the situation is — it’s time to struggle. We knew it that we won’t draw many points, so this is the reality.”

“I felt his arms around my neck and shoulder,” Azpilicueta said. “The referee can make the decision and VAR is there. It is difficult but I would encourage the referee to go and look at the monitor. It is there to help so why not take 20 seconds to go and review it?”

In the second half, Edinson Cavani came off the bench for his United debut and flicked the ball into the side netting with his first touch.

A bigger impact was made by another new Premier League arrival, as Chelsea goalkeeper Edouard Mendy made a string of fine saves including a diving block to keep out Marcus Rashford’s late shot.

“You rely on goalkeepers in those moments if it’s a tight game,” Chelsea manager Frank Lampard said. “There wasn’t many chances and great quality at the end and he showed what he’s there for.

“We brought him in because of his quality. He’s showed great composure in the games he’s played already and I’m delighted with the saves he’s made today.”

After being beaten by Crystal Palace and Tottenham, Manchester United is still waiting for a home win after three matches. It’s been 48 years since United opened a season without winning any of its first three home matches, although this time there have been no fans allowed into games to see the frustrating start due to the pandemic.

It’s now 62 matches unbeaten for Liverpool in the league at Anfield — one short of the club record.

But Jürgen Klopp’s side had to come from behind to preserve the run after Sander Berge in the 13th scored a penalty awarded contentiously. Fabinho appeared to tackle Oli McBurnie on the edge of the penalty area but the free kick was upgraded to a penalty.

Liverpool leveled in the 41st when Sadio Mane’s header was only palmed away by goalkeeper Aaron Ramsdale and Roberto Firmino was well placed to score.

And Diogo Jota made it two goals in four league matches for Liverpool by heading in Mane’s cross in the 64th.

Palace is fifth in the standings, a point ahead of Chelsea.

Wilfried Zaha’s reverse pass set up Jairo Riedewald’s opener in the eighth and he knocked in the second in the 64th from Michy Batshuayi’s cross.

Fulham finished with 10 men after Aboubakar Kamara was sent off for a high challenge on Eberechi Eze, although Tom Cairney still managed to net a consolation goal.

Bale turns back time as Man U and Chelsea draw