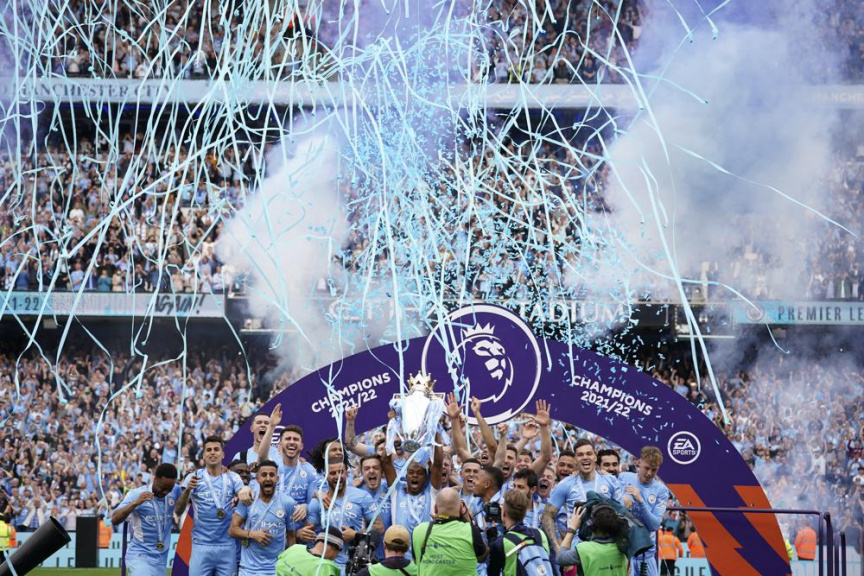 MANCHESTER, England (AP) — Manchester City had been here before, losing at home and risking throwing away the title.

Would the leaders choke like never before in the Premier League?

The prospect of a first-ever changing of the lead on the final day was growing Sunday with Villa leading 2-0 at the stunned Etihad Stadium as challenger Liverpool chased a win over Wolverhampton.

Just like when a comeback was conjured up in 2012 to win its first Premier League title with two stoppage-time goals, City produced another rousing recovery.

This time it took three goals — all scored in five minutes from the 76th minute — to turn it around against Villa to win 3-2 and successfully defend the title by a single point.

Even when City was losing, Liverpool was still in second place because it was only drawing 1-1 with Wolves at Anfield.

But the importance of lkay Gündoğan’s second goal in the 81st minute was magnified moments later when Mohamed Salah sent Liverpool in front against Wolves before Andy Robertson sealed a 3-1 win for Liverpool.

“We came back from the dead today and won the game,” captain Fernandinho said after his final game for City. “It’s an amazing feeling.”

No wonder thousands of City fans flooded onto the field at the final whistle, defying new orders against pitch invasions. Soon the stadium was cloaked in blue smoke.

Once the field was cleared, the Premier League trophy could be handed to City for the sixth time in 11 seasons. That looked unlikely when Matty Cash headed Villa in front in the 37th minute and former Liverpool star Philippe Coutinho extended the lead in the 69th.

It took İlkay Gündoğan’s header to begin the comeback in the 76th and Rodri equalized two minutes later by striking from the edge of the penalty area, placing the ball through a tight gap into the bottom corner. When Gündoğan tapped in Kevin De Bruyne’s cross in the 81st, the comeback was complete.

“Sometimes it’s nice to live these kind of situations,” Pep Guardiola said after winning his fourth Premier League title since taking charge of City in 2016. “We live it for the future. I had a feeling that it will help us to be stronger next season.”

Liverpool — the only team to disrupt City’s run of titles since 2018 with its 2020 success — had to settle for second place. Jürgen Klopp’s FA Cup and League Cup winners are, however, still on for a possible treble with the Champions League final against Real Madrid on Saturday.

“I can imagine it was much worse for the people at home watching on their tellies,” Klopp said. “When Aston Villa is 2-0 up and you think, ‘Wow, it could really be’. I was not really aware of it.”

Liverpool was being held 1-1 when City was trailing and only went in front after the eventual champions took the lead in the final 10 minutes of the season.

The great rivals could only be separated by a single point in the final standings.

“The season was so close, so tight,” Klopp said. “What I learned in life is, if you keep going, you get the reward. Not today but we will get it. It’s up to us to keep going.”

Tottenham will be back in the Champions League next season after a two-season absence thanks to a 5-0 rout of last-place Norwich clinching fourth place.

Son Heung-min netted twice to finish the season as joint-top league scorer with Salah on 23 goals. There was also a double from Dejan Kulusevski, who has helped to engineer the north London club’s upturn since joining in January on an 18-month loan from Juventus. Harry Kane, who was denied a move to Manchester City ahead of this season, headed in his 17th and final goal of the league campaign.

Tottenham heads into the offseason trying to keep coach Antonio Conte, the architect of the resurgence since being hired in November.

There will be no return to European football’s top-tier competition for Arsenal after five seasons away after a collapse that was corrected on the final day by beating Everton 5-1 to finish fifth.

Manchester United will join Arsenal in the Europa League under new manager Erik ten Hag despite losing 1-0 to Crystal Palace. West Ham wasted the chance to dislodge United from sixth place after losing 3-1 at Brighton so this season’s Europa League semifinalists will drop into the Europa Conference League.