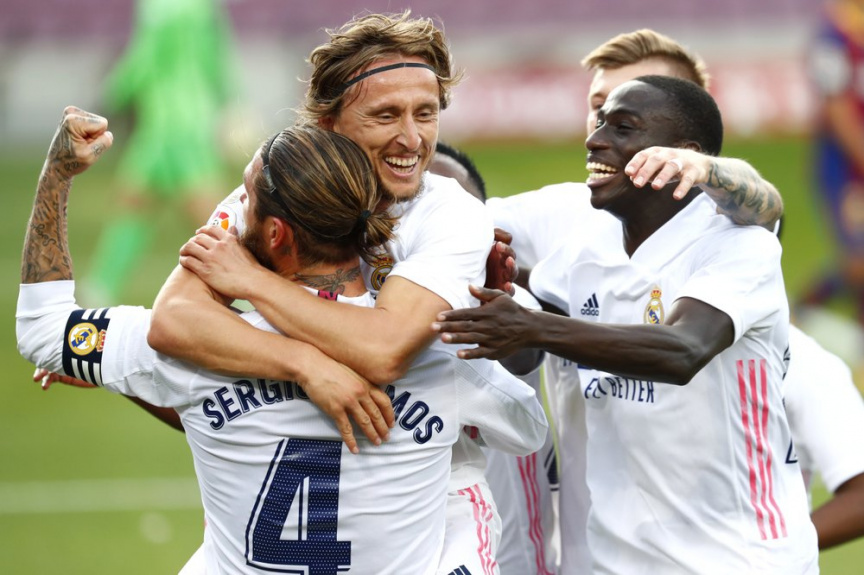 BARCELONA, Spain (AP) — Defender Sergio Ramos showed once again why he is the heart of Real Madrid in leading the team to a 3-1 win at Barcelona -- with a little help from the video assistant referee.

Ramos created and scored the winning goal in their first meeting of the season at an empty Camp Nou on Saturday. The clásico was yet another victory that Ramos has led in his long career at Madrid, especially since the exit of Cristiano Ronaldo two years ago.

Ramos’ importance for Madrid was seen in back-to-back losses in the run-up to the trip to their fiercest rival. Ramos was knocked out of the loss to Cádiz at halftime with a knee injury last weekend that also sidelined him for the Shakhtar defeat in the Champions League midweek. Without him, the team was listless and outhustled.

With him back barking orders in the center of its defense, Madrid was the aggressive, compact side that won La Liga from Barcelona last season.

Ramos likewise proved key in the opposing area when he used his wiles to grapple with Clement Lenglet to gain position for a high ball. With Lenglet tugging his shirt, Ramos fell to the turf and complained vehemently. After consulting the video screen on the touchline, referee Juan Martínez ruled Lenglet impeded Ramos from contesting the ball.

That sent Ramos to the penalty spot where he drove a low shot past Neto to restore Madrid’s lead for good in the 63rd minute.

“Both Lenglet and I take our defending to the limit, and in this case it was very clear,” Ramos said. “He grabbed me as I was jumping. The VAR is there to help and I think it was a penalty. We then went looking for a third goal after they had suffered that blow to their morale instead of just sitting back.”

“The decision of the penalty had a final influence in the score,” Koeman said. “It is first a foul by Ramos on Lenglet. Lenglet grabbed his shirt, but not enough to bring the player down. At least not enough to make the player fall away from you, but rather to pull the player toward you. So, for me, it is not a penalty.”

Madrid leads the league with 13 points. Barcelona has 7 points with a game in hand — and added pressure when it travels to Juventus in the Champions League on Wednesday.

Camp Nou is normally a cauldron for the clásico. Barcelona’s faithful greet the two sides with enormous mosaics featuring the club’s blue-and-burgundy colors, and use their 90,000-plus lungs to make it as uncomfortable as can be for the visitors. On Saturday, Europe’s biggest stadium was warmed by a glorious sun but empty except for reserve players in face masks.

Koeman’s first clásico in his mission to rebuild the team that failed to win a trophy last season prompted big decisions to play two teenagers and leave Antoine Griezmann on the bench. Koeman surprised by starting Pedro “Pedri” González alongside fellow 17-year-old Ansu Fati in attack.

Pedri did not shine, but Fati was the driving force for Barcelona in his new position as striker in front of Lionel Messi.

Koeman also started new arrival Sergiño Dest. The U.S. defender impressed with his marking of Vinícius Júnior and incursions from the right flank.

To recreate a little bit of the atmosphere before kickoff, the club played recorded sounds of fans chanting while the players warmed up, and played a recording of the club hymn.

Federico Valverde struck five minutes in for Madrid when he took a through ball from Karim Benzema and blasted it inside the far post.

Fati hit right back three minutes later. The budding star stabbed home his fifth goal in six games from a pass by Jordi Alba after Messi found the left back with a lob down the left side.

Barcelona took the initiative after the restart as Dest and Alba found space on the flanks, and Fati found Coutinho with a cross that the Brazilian headed into the side netting.

That was when Ramos tilted the match in Madrid’s favor.

With his defense exposed, Neto resisted as he could, making three good saves until substitute Luka Modric drew him off his line and fired in Madrid’s third.

“We know what Sergio means for us, he is more just than a player,” Madrid coach Zinedine Zidane said. ““We deserved the win. We could have scored more.”

Worst starts since 2014 for City, United