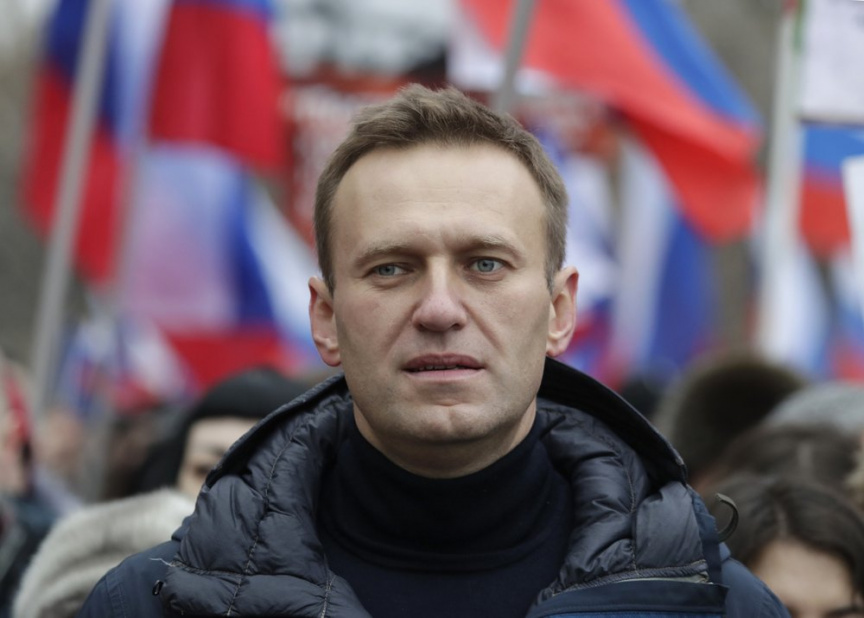 MOSCOW (AP) — Colleagues of Russian opposition leader Alexei Navalny said Thursday that a water bottle with a trace of the Novichok nerve agent was found in his hotel room in the Siberian city of Tomsk after he fell ill on a flight from there to Moscow last month.

Navalny later was flown to Germany, where he was kept in an induced coma for more than two weeks as he was treated with an antidote at Berlin’s Charite hospital. Members of his team accused the Kremlin of involvement in the poisoning, charges that Russian officials have vehemently denied.

The Kremlin has bristled at calls from German Chancellor Angela Merkel and other leaders to answer questions about the poisoning, urging Germany to provide its evidence.

On Tuesday, Navalny posted a picture of himself from his hospital bed, hugged by his wife and children. “I still can’t do almost anything on my own, but yesterday I managed to breathe on my own for the entire day,” he added in the post.

A video posted on Navalny’s Instagram account on Thursday showed members of his team in plastic gloves inspecting his hotel room in Tomsk shortly after he left the city on Aug. 20 and collapsed on a flight home. The plane made an emergency landing in Omsk, where he was hospitalized before being taken to Berlin two days later on a medevac plane.

Navalny’s Instagram post said they went to the room an hour after learning that he had fallen ill, accompanied by a lawyer, and packed half-empty plastic water bottles and unspecified other items for further inspection. In the video post, someone who appears to be a hotel employee could be heard telling members of the Navalny team that they need to ask police before taking any items from the room, and one of them refuses to do that.

“Two weeks later, a German laboratory found a trace of Novichok on a bottle from the Tomsk hotel room,” they said. “And then another three labs that took Alexei’s samples proved that he was poisoned with it. Now we understand: It was done before he left his room to go to the airport.”

The founder of the Berlin-based organization Cinema for Peace, which helped organize the medevac flight for Navalny, said that some bottles were brought to Germany last month.

“I made sure that we flew some of Navalny’s water bottles with us on our plane with Navalny,” Jaka Bizilj told The Associated Press in a text message.

There had been previous speculation that Navalny was poisoned at the airport, where he drank a cup of tea before boarding the flight.

“We didn’t have much hope of finding something,” members of Navalny’s team said on Instagram. “But as it was absolutely clear to us that Navalny wasn’t just ‘slightly unwell’ or ‘under the weather’ and candy wouldn’t help, we decided to take everything that could hypothetically be of use and hand it over to doctors in Germany.”

They noted that they did so because they were aware that Russian authorities would be reluctant to launch a probe.

“It was quite obvious that they wouldn’t investigate the case in Russia,” they said. “And so it happened: Nearly a month after Russia hasn’t recognized that Alexei was poisoned.”

Navalny’s spokeswoman Kira Yarmysh tweeted that “Navalny had been poisoned with Novichok at the hotel before he went to the airport.”

But Lyubov Sobol, a top Navalny associate, later tweeted that while “traces of Novichok were found on a bottle from the hotel, it doesn’t mean that Navalny was poisoned specifically with the bottle.”

Georgy Alburov, a close colleague of Navalny who inspected his hotel room in Tomsk along with other associates, said in a live broadcast on YouTube that German experts said the bottle wasn’t the source of the Novichok and only had a trace amount of the nerve agent, probably left by Navalny when he drank from it after he had already been poisoned.

Alburov alleged that Navalny probably was poisoned in the hotel, adding that its management had refused to show them recordings from surveillance cameras. He said police in Tomsk later seized computer servers containing the recordings.

A German military lab determined that Navalny was poisoned with Novichok, the same class of Soviet-era agent that Britain said was used on former Russian spy Sergei Skripal and his daughter in Salisbury, England, in 2018.

Chancellor Angela Merkel has said the German lab conducted tests on “various samples from Mr. Navalny,” but neither she nor other German officials have elaborated.

On Monday, the German government said independent tests by labs in France and Sweden backed up its findings. The Hague-based Organization for the Prohibition of Chemical Weapons is also taking steps to have samples from Navalny tested at its designated labs.

The Kremlin has said that Russian doctors who treated him in Omsk found no sign that Navalny was poisoned. Russia has repeatedly prodded Germany to share Navalny’s analyses and other medical data and compare notes with the Russian doctors.

German officials have responded to Moscow’s request for evidence by saying that Russian authorities must have the samples already since Navalny spent two days in the Omsk hospital.

Russian Foreign Minister Sergey Lavrov, who canceled a scheduled trip Tuesday to Berlin, said in a TV interview earlier this week that Russian authorities have conducted a preliminary inquiry and documented the meetings Navalny had before falling ill, but he emphasized that investigators need to see evidence of poisoning to launch a full criminal probe.

Lavrov accused the West of trying to smear Russia and use the incident as a pretext for new sanctions against Moscow. He argued that Navalny’s life was saved by the pilots of the plane who quickly landed in Omsk after he collapsed on board and by the rapid action of doctors there — something he said Western officials have failed to recognize.

Russian Foreign Ministry spokeswoman Maria Zakharova criticized the European Union’s plan to name a prospective sanctions mechanism for punishing human rights violators in honor of Navalny. “We hope that the EU will regain common sense, and our partners will abandon the practice of finger-pointing and will make conclusions only on the basis of real and confirmed facts,” she said.

Trump pledges woman for court, pushes Senate to move on