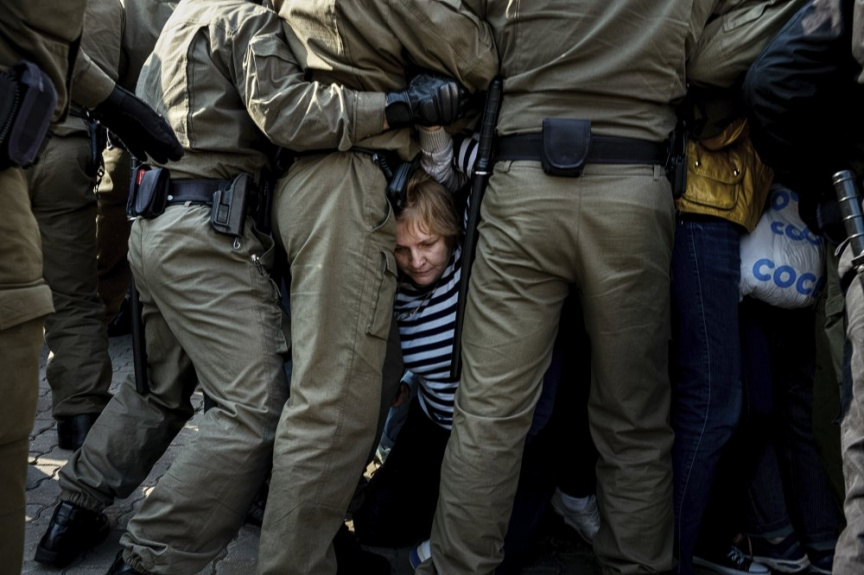 Police officers block and detain protesters during an opposition rally to protest the official presidential election results in Minsk, Belarus, Saturday, Sept. 12, 2020. Daily protests calling for the authoritarian president's resignation are now in their second month and opposition determination appears strong despite the detention of protest leaders. (AP Photo/Misha Friedman)

KYIV, Ukraine (AP) — Belarus’ president, beleaguered by six weeks of mass protests demanding his resignation, on Thursday announced he was putting troops on high alert and closing the country’s borders with Poland and Lithuania.

President Alexander Lukashenko’s decision underlines his repeated claim that the wave of protests is driven by the West. He faces increasing criticism from the United States and the European Union.

Protests began after the Aug. 9 presidential election that official results say gave the authoritarian leader a sixth term in office; opponents say the results were manipulated.

“We are forced to withdraw troops from the streets, put the army on high alert and close the state border on the west, primarily with Lithuania and Poland,” Lukashenko said at a women’s forum.

Lukashenko also said Belarus’ border with Ukraine would be strengthened.

“I don’t want my country to be at war. Moreover, I don’t want Belarus and Poland, Lithuania to turn into a theater of military operations where our issues will not be resolved,” he said. “Therefore, today in front of this hall of the most beautiful, advanced, patriotic people I want to appeal to the peoples of Lithuania, Poland and Ukraine — stop your crazy politicians, don’t let war break out! ”

He did not mention neighboring Latvia, which like Poland and Lithuania is a NATO member.

Earlier Thursday, the main opposition candidate in the disputed presidential election said that activists are compiling a list of law enforcement officers who were allegedly involved in violence against protesters denouncing the results of the vote.

Nearly 7,000 people were detained and hundreds were brutally beaten by police during the first several days of post-election protests.

Lukashenko’s main challenger in the election, former English teacher and political novice Sviatlana Tsikhanouskaya, said “we have been given the names of those who were beating and torturing people. We are preparing a list of officials and law enforcement officers who have taken part in lawless repressions.”

Human rights groups are working with opposition activists to identify the officers and officials, Tsikhanouskaya said, adding that the list will be shared with the United States, the European Union and Russia.

Tsikhanouskaya, who left for Lithuania in the wake of the election under pressure from Belarusian authorities, said the opposition will name the list in honor of Alexander Taraikovsky, a protester who died in Minsk the day after the election as police dispersed peaceful demonstrators.

Authorities initially said an explosive device Taraikovsky intended to throw at police blew up in his hands and killed him. However, Associated Press video showed he was not holding any explosives when he fell to the ground, his shirt bloodied.

Belarusian authorities later acknowledged that Taraikovsky might have been killed by a rubber bullet. The street in the capital of Minsk where Taraikovsky died turned into a pilgrimage site, with thousands of people, including European ambassadors, laying flowers there.

After the initial broad crackdown on protests, Belarusian authorities changed tactics and tried to end displays of dissent with the selective detentions of demonstrators and the jailing of opposition leaders.

The U.S. and the EU have criticized the presidential election as neither free nor fair, and urged Lukashenko to start talks with the opposition — a call he has rejected. Washington and Brussels have been pondering sanctions against Belarusian officials for alleged vote-rigging and the violent response to protests.

On Thursday, the European Parliament overwhelmingly passed a resolution rejecting the official election results and saying it would not recognize Lukashenko as the legitimate president once his current term expires Nov. 5.

Belarus’ foreign ministry responded strongly, saying: “We are disappointed that the European Parliament, positioning itself as a serious, objective and democratic structure, could not find the political will to look beyond its nose, overcome one-sidedness and not become a hostage to conventional cliches.”

Russia, Lukashenko’s main ally and sponsor, has maintained staunch support for the Belarusian leader. Moscow announced this week it would offer a new $1.5 billion loan to his government.

Polish Prime Minister Mateusz Morawiecki said Friday during a trip to Lithuania that the two countries — both Belarus’ neighbors — will continue to offer medical and material assistance to Belarusians who were hurt and persecuted during the protests. He argued that the EU and international lenders should offer at least 1 billion euros in economic support for Belarus and its businesses.

“It is crucial for Europe to be aware of how important a free and sovereign Belarus is for the security and the welfare of our entire continent,” Morawiecki said.