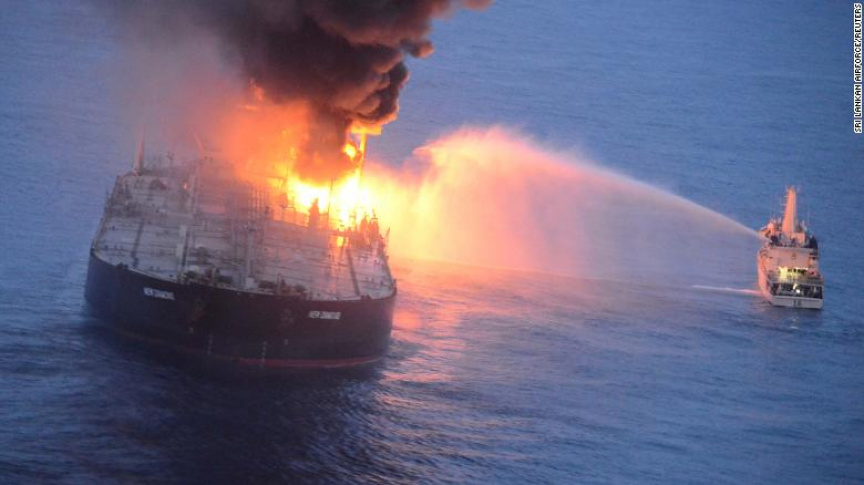 A Sri Lankan Navy boat sprays water on the New Diamond after a fire broke out off east coast of Sri Lanka on Thursday, September 3, 2020.

New Delhi (CNN) - Firefighting crews from Sri Lanka and India are working to put out a large blaze aboard an oil tanker that has been burning since Thursday, off the coast of the south Asian island nation.

One Filipino crew member died after a boiler in the main engine room exploded, causing the fire, the Sri Lankan Navy said. All other persons on board, 22 in all, were rescued from the ship, which is carrying 270,000 metric tons of crude oil.

The 20-year-old vessel had been bound from Ahmadi in Kuwait to the Indian port of Paradip, according to Marine Traffic, which monitors global shipping.

Speaking to CNN, Sri Lankan Navy Captain Indika Desilva said that as of Friday morning local time, the fire was "still on."

"Efforts are on to prevent the fire from spreading to the cargo oil. No information has been received of an oil spill yet. Firefighting continues," he said.

According to a statement from the Sri Lankan Navy, currently the fire has had "no effect" on the oil stored on board, and "necessary steps are being taken to prevent the fire from spreading to those crude oil storage facilities."

"There is still no risk of the ship leaking oil into the ocean," the statement said.

Fire breaks out on plane at Hanimaadhoo Airport